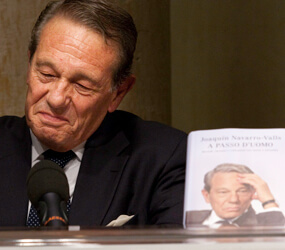 ROME – The political campaigns and policies of the Democratic and Republican parties in the United States suffer from “hypocrisy” and ethical inconsistency, a former papal aide said.

Joaquin Navarro-Valls, who served as Vatican spokesman for Popes John Paul II and Benedict XVI, said both major U.S. political parties “run campaigns that are inspired by an asymmetrical ethics” in which a rule or ethical principle applies in one instance, but not in another.

To give an example, he highlighted the pro-life platform of former-U.S. President George W. Bush, who was strongly anti-abortion, but “at the same time began a war, such as the war in Iraq.”

It is one example of “the case of hypocrisy in the language of the Democrats and Republicans,” he said.

Navarro-Valls spoke Nov. 18 during the presentation of his first book, “A Passo D’Uomo” (“At a Walking Pace”). The book, initially published only in Italian, is a collection of articles he has written for the Rome newspaper La Repubblica.

The short essays, which include some previously unpublished material, cover events during the pontificate of Pope John Paul II and current moral and philosophical issues of the day.

In his book, Navarro-Valls said an authentically ethical platform is consistently applied to all aspects of life.

“An ethical vision that is partial is like a person who only tells the truth every now and then and yet wants to be believed all the time,” he wrote.

Democrats are guilty of ethical inconsistency, too, he wrote, when they are able to decry the immorality of war in Iraq, but don’t easily recognize the ethical dimension and social impact of undermining the family through legislation supporting same-sex unions and allowing the use of embryonic stem cells in research.

“On the other side, for the ‘theocon,’ supporting the war is an ethical fact that doesn’t exist on the same plane as respecting environmental protection or building schools in the Third World,” he wrote.

Such an irrational and ethically inconsistent approach to the world “destroys the ethical validity of whatever is being proposed” by either side and is “immobilizing political decision-making” not just in the United States, but in Europe, too, Navarro-Valls wrote.

Though it is difficult, the only valid approach is one that is ethically consistent and recognizes the rights and promotes the good of all people at every stage of their lives, he wrote.