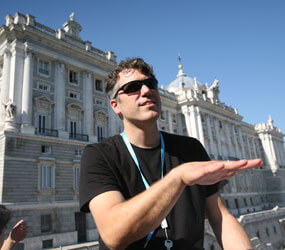 MADRID – Mike Dill took notes as he stood outside San Nicolas de los Servitas Church – the oldest church in Madrid and likely one of the places around the Spanish capital that the Albany, N.Y., resident will guide World Youth Day pilgrims.

Dill, 26, who just got out of the Army, will serve as a volunteer guide to pilgrims from West Point and the U.S. Air Force Academy at what will be his first World Youth Day and his first experience in Spain.

“When you hear the stories of faith and saints in Spain and how the people fought hard to preserve the faith here, it makes you appreciate your faith more,” said Dill, who arrived in early August to spend time getting oriented to key World Youth Day sites and learn how to get around on the Madrid Metro.

Dill said he liked being a pilgrim instead of a tourist.

“As a tourist you come and visit a lot of churches, but as a pilgrim you come as the church,” Dill said.

Joann Roa, 40, director of Hispanic ministry for the Diocese of Kansas City-St. Joseph, Mo., arrived in Madrid Aug. 10 for what will be her fourth World Youth Day. This year she will be serving as a guide for pilgrims from New Mexico, Canada and Detroit. Roa said that, even before she had solid plans to be here, she had been encouraging friends and colleagues to find a way to get to Madrid this year.

Roa said she has read about the need for evangelization in Spain and thinks this World Youth Day will be an important event for Madrid.

“People are tired of words, and so I have been telling everyone they should take that leap of faith and just come to Madrid. We are going to be able to evangelize just by being here while Spain is struggling to catechize its people,” Roa said.

“Maybe it is appropriate that we are here in Spain, which has given us so many great saints in order to build up the people in Christ and help energize the people in Spain in their faith,” Roa said.

Colin Nykaza of Fairfield, Conn., said Madrid might or might not be prepared for the onslaught of fervent religious expression – judging by some of the reactions he has already seen while walking around the city.

“Ready or not, it is coming,” Nykaza said, adding that he will shepherd groups of pilgrims from Hawaii.

“I hope to help the kids have a personal encounter with Christ and Our Lady in a way that is honest and a prayerful witness. All the guides should be joyful and transparent, because young people watch our actions and can sense whether or not we are authentic,” he said.

Franciscan Father Agustino Torres, superior of St. Michael’s Friary, Paterson, N.J., came to Madrid early, hoping to help out and guide pilgrims because he said he believes pilgrimage is an important part of faith.

The 35-year-old priest said arriving a couple of days “ahead of the (Aug. 16-21) wave is going to be ideal, and we will have the advantage of knowing where we are going.”

“After one day in Madrid it is not confusing, but then I am used to New York City,” he said. “I think it will be a great city for World Youth Day – the infrastructure is good but I don’t think the people of Madrid really understand what they are about to see.”

The priest said Spaniards will see “joy in abundance” and it will not be rooted in sports or secular culture. Father Torres, who wears a gray habit and sandals, said a Madrid man stopped him on the streets to tell him that “Jesus is dead.”

“I said, ‘Well, Jesus is alive,’ and I persisted. He began to waver. It is one thing to discuss our faith here, and we will do that, but to witness through the love in the hearts of the youth will really touch the hearts of the people here,” he said.

Father Torres said he has been pleasantly surprised to have bumped into a lot of leaders in youth and young adult ministry – people he knows from his work and travels in the U.S.

“I feel like the band is getting back together. I know a lot of them here, and it is sort of the who’s who of the Catholic young scene in the United States: A lot of these people are highly talented, very gifted and all active in whatever ministry …. They are all coming here for this. It is impressive.”