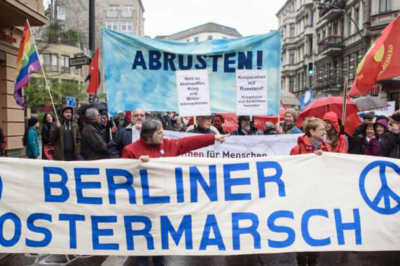 A group marching for nuclear disarmament carries a banner during a protest in mid-April in Berlin. Agencies of the U.S. and European Catholic bishops have called for all nations to develop a plan to eliminate nuclear weapons from their military arsenals. (CNS photo/Clemens Bilan, EPA)

WASHINGTON — Agencies of the U.S. and European Catholic bishops have called for all nations to develop a plan to eliminate nuclear weapons from their military arsenals.

A joint declaration released July 6 by the U.S. Conference of Catholic Bishops and the  Conference of European Justice and Peace Commissions called upon the U.S. and European nations to work with other nations to “map out a credible, verifiable and enforceable strategy for the total elimination of nuclear weapons.”

“The indiscriminate and disproportionate nature of nuclear weapons compel the world to move beyond nuclear deterrence,” the declaration said.

Titled  “Nuclear Disarmament: Seeking Human Security,” the declaration was released a day ahead of the July 7 conclusion of a second U.N. conference discussing a treaty to prohibit nuclear weapons altogether.

The declaration was signed by  Bishop Oscar Cantu of Las Cruces, New Mexico, chairman of the USCCB Committee on International Justice and Peace, and  Archbishop Jean-Claude Hollerich of Luxembourg, president of the Conference of European Justice and Peace Commissions.

“The teaching of our church, from the catechism to St. Pope John Paul II and Pope Francis, about the urgent need for nuclear disarmament is clear,” Bishop Cantu said in a statement accompanying the declaration’s release. “It is time for us to heed this moral imperative and promote human security both within the United States and Europe and globally.”

The U.S. and most European nations have sat on the sidelines during the U.N. meetings discussing a weapons ban, preferring to focus on the need for broader security measures to allow for strategic stability on the road to verifiable reductions in nuclear arsenals. In all, about 40 nations are boycotting the negotiations to ban such weapons. Most nations continue to support the Non-Proliferation Treaty to prevent the spread of nuclear weapons and weapons technology.

Bishop Cantu told Catholic News Service his committee and the European bishops wanted to highlight the “glaring absence” of nuclear weapons states, including the U.S., from the U.N. conference.

“The silence gives us some clarity to raise a moral voice, to say, ‘Let’s look from a moral perspective what our priorities are as a nation when we’re looking to invest hundreds of billions of dollars into the update and renewal of the nuclear arsenal,” he said.

“There are some really serious moral issues, economic issues, priority issues, policy issues that we want to lift up to society and our own electorate,” the bishop said.

“We can lend a voice as well to the Vatican statement that was issued in 2014 that was really critical that clarified for the Catholic world at least and others … that the ethic of deterrence was supposed to be one step on the road toward the elimination of nuclear weapons. It’s (stockpiling weapons) not the pathway itself,” Bishop Cantu added.

The declaration acknowledged that nuclear weapon states have been spending billions of dollars to modernize their nuclear arsenals. “These costly programs will divert enormous resources from other pressing needs that build security,” it said.

“The fact that most of the world’s nations are participating in this effort testifies to the urgency of their concern, an urgency intensified by the prospect of nuclear terrorism and proliferation, and to the inequality and dissatisfaction of non-nuclear states about the lack of progress in nuclear disarmament,” the statement said.

The declaration cited Pope Francis, who during his papacy has repeatedly called for the elimination of nuclear weapons, most recently in a message to the United Nations’ opening conference on a treaty to ban such weapons in March.