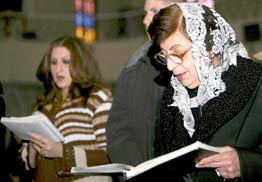 WASHINGTON – Members of the U.S. Commission on International Religious Freedom heard testimony July 25 from witnesses regarding the persecution of the ancient, non-Muslim minority religions in Iraq.
The witnesses mentioned their personal experiences as religious minorities as well as their professional experience working in Iraq.
Commission chair Michael Cromartie said in his opening statement that Iraq was added to the commission’s watch list this year for continued violations of religious freedom. He said the plight of Christian minorities in Iraq includes “the assassination of Christian religious leaders, the bombing and destruction of churches and violent threats intended to force Christians from their homes.”
More than 1.5 million refugees have fled religious persecution in Iraq since 2003, according to the U.N. High Commissioner for Refugees.
Although Christians account for only 3 percent of the total Iraqi population, they make up 40 percent of the refugees now living in nearby countries, including Jordan, Syria, Egypt and Iran. Another 2 million people, many living in the northern Nineveh plain, are internally displaced.
U.S. Rep. Anna G. Eshoo, D-Calif., the only Assyrian-American serving in Congress, testified briefly before the commission that her grandparents had left what was then the Ottoman Empire in the early part of the 20th century to escape persecution.
She said she and 73 other members of the House of Representatives wrote to President George W. Bush in June to urge him to take seriously the message of Pope Benedict XVI regarding the Christian population in Iraq.
“As the pope laid out to the president in clear and unequivocal terms, we are witnessing the emergence of an Iraq that simply does not tolerate Christians and religious minorities,” she said in her statement.
Commission members asked the witnesses about the cause of religious persecution, its nature and what the United States might do to help these vulnerable groups in Iraq. The hearing was the first of two intended to give the commission a better idea of the nature and scale of religious persecution in Iraq. The next is scheduled for September and will focus on Sunni-Shiite sectarian violence.
The first witness to testify was the Rev. Andrew White, vicar of St. George’s Anglican Church in Baghdad, Iraq, and president and CEO of the Foundation for Reconciliation and Reconstruction in the Middle East.
Rev. White said that in one week 36 members of his congregation in Iraq were kidnapped. He said the Christians living in Iraq are in need of basic necessities, including food, water and physical protection, but no government has come forward to help. He said the United States has the potential to provide these services in Iraq, but as yet has not acted.
“The United States can do a huge amount, but you have to do it, and not talk about it and write papers, and actually do something,” he said. “Most Americans know absolutely nothing about what’s going on on the ground in Iraq, but their position and their attitudes will influence exactly what happens in Iraq.”
Another witness, Pascale Warda, former minister of migration and displacement in Iraq and a Chaldean-Assyrian Catholic, delivered her statement through an interpreter. She said Christians in Iraq are targeted by violence because “they are identified as American allies and infidels, for the simple reason that they share a common faith with those in the Western world.”
Warda said she has survived four assassination attempts since 2004, including one in which all four of her Christian bodyguards were killed.
Warda spoke of the situation for Chaldean-Assyrian Christians, the largest minority group in the region, the majority of whom are Catholic. She said members of minority religions in Iraq have three choices: convert to Islam; pay the “jizya,” a tax imposed on non-Muslims; or leave the country with next to nothing.
Many Christians have fled to northern Iraq seeking safety and have overwhelmed the Nineveh plain, an area with a large Christian population and Christian roots that go back 2,000 years to St. Thomas the Apostle.
Those displaced in the Nineveh plain lack housing, jobs and schools for their children and need the support of the American and Iraqi governments if they are to stay in the region and not be forced from the country, she said.
“Insecurity is limiting us, but do we continue to live? I think yes,” she said in an interview with Catholic News Service. “Iraq is a very rich country. In one year it would change completely if security is there. So people need security.”
The Catholic Church is limited in how it can help the church in Iraq, Warda said.
“Since it started, many priests were killed in a very bad way,” she said. “Many churches were destroyed and targeted, so the bishops are in a situation that is not really easy … but they didn’t stop; they do as they can.”
The U.S. Commission on International Religious Freedom was created in 1998 to monitor religious freedom worldwide and make policy recommendations to the president, the secretary of state and Congress. Members of the commission are selected by the president and members of Congress from both parties on the basis of their knowledge and experience of international religious freedom.
The commission’s annual report covers select countries that have shown prolonged or extensive violations of religious rights.
Other witnesses July 25 included Donny George, former chairman of the Iraqi State Board of Antiquities and Heritage, who left Iraq last year when the life of his 17-year-old son was threatened; Michael Youash, project director of the Iraq Sustainable Democracy Project; and Suhaib Nashi, the Iraqi-born secretary of the Mandaean Society of America.