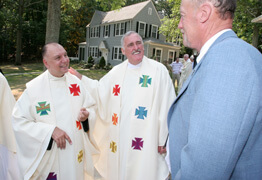 VATICAN CITY – Pope Benedict XVI has named Father Neil Tiedemann, a Brooklyn-born member of the provincial council for the Passionist order, as bishop of Mandeville, Jamaica.

He succeeds Bishop Gordon D. Bennett, a former auxiliary bishop in the Baltimore Archdiocese who resigned in August 2006 for health reasons.

The announcement was made at the Vatican May 20.

Bishop-designate Tiedemann, 60, has worked in parishes in Honduras, New York, Massachusetts and New Jersey. He was elected in 2006 as second provincial consultor in the Passionists’ St. Paul of the Cross Province, based in Union City, N.J.

After his ordination, he worked as associate pastor at Immaculate Conception Parish in Jamaica, N.Y., 1975-82, and also worked for Catholic Charities Brooklyn and Queens, 1977-78.