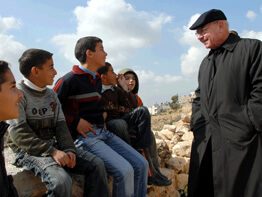 NAHALEEN, West Bank – The encroachment of Israeli settlements on Palestinian water sources must be addressed, said the president of the U.S. Conference of Catholic Bishops.

Bishop William S. Skylstad of Spokane, Wash., said his two-day visit to view Catholic Relief Services’ projects in West Bank farming villages brought to his attention the plight of farmers who are losing access to their water supply.

“It is the first time I have become aware of the critical nature of the water supply. (Palestinians) feel their water supply is being cut from them by the encroachment (of Israeli settlements) beyond the green line,” said the bishop, who grew up on an apple farm in Washington and has been interested in farming all his life.

Bishop Skylstad visited Israel and the Palestinian territories Jan. 11-18, participating in the Coordination of Episcopal Conferences in Support of the Church of the Holy Land and the Assembly of Catholic Ordinaries of the Holy Land. Bishop Skylstad and other bishops were to travel to the Gaza Strip Jan. 13 and spend three days visiting Catholic parishes and religious leaders in northern Israel Jan. 14-16.

The bishop said the Israelis are looking to the water supply to foster the future growth of the settlements.

“It gives you a special appreciation for the farmers in the area struggling…. It is amazing how they use what we in the (United) States would call hilly and untillable land … and their sophistication of getting so much out of poor land,” he said.

On the edge of the village lands where olive groves grow in the rocky valley and terraced hillsides, Bishop Skylstad listened attentively to the farmers from this village of 1,200 families. They told him about the mounting difficulties they face growing and selling produce because of Israeli travel restrictions, constrictions placed on agricultural land by the expansion of Israeli settlements surrounding the village, and the settlements’ negligent contamination of local spring water.

Just a few hundred yards away, a neighboring Israeli settlement has encroached on the village, and together with three other settlements is slowly taking possession of Nahaleen agricultural land on the other side of the hill.
The farmers pointed out the bare excavated site where the city council was to build a girls’ elementary school, in cooperation with Baltimore-based CRS, with a grant from the U.S. Agency for International Development. Palestinian Authority funding to the project was cut after the Hamas political party won the majority of seats on the village council.

However, through the CRS-managed food-for-work project the villagers widened the access road to the agricultural land and planted 400 olive-tree seedlings, providing food and work for some 315 families. CRS is the U.S. bishops’ international relief and development agency.

Earlier, Bishop Skylstad met with parishioners in the village of Aboud to hear about their concerns over losing farmland to the Israeli separation barrier.

“Part of our role is to look and search for a sense of solidarity,” the bishop said. Palestinians “are very sensitive about how they are perceived in the broader world and have a great fear of being characterized as terrorists.”

He added he could not make any sweeping conclusions because he was in the area for only two days.

However, he said he was concerned by the growing difficulty of Palestinians “increasingly being squeezed with the building of barriers and increasing encroachment on Palestinian land.”

The bishops had not met yet with any Israeli citizens, but they were scheduled to meet with either Israeli Prime Minister Ehud Olmert or Foreign Minister Tzipi Livni.

“The (separation) wall is an expression of fear of terrorism. It is built in the name of security, but it is also an expression of fear,” said Bishop Skylstad. He said the numerous acts of terror and the kidnapping of three soldiers last summer have had a strong effect on Israelis.
Following a tour of the Dehiyshe refugee camp, Bishop Skylstad told young Palestinians taking part in the CRS Cyber Bridge project never to lose hope despite the difficulties. Students in the project share stories about their lives, exchange information and research other countries and cultures on the Internet.

“People have the right to be free and everyone to live together – Palestinians, Christians, Jews and Muslims. We are all God’s people and we are together,” he said.

He told Catholic News Service that although the land is gripped by fear, anger and frustration people need to be “visionaries of peace and justice” and not allow themselves to be distracted from that goal.

“Fear divides us and oppression is a form of fear and insecurity. We need to learn how to relate to one another no matter our (differences), and we have to live together in justice and in peace,” he said. “We (as the church) need to do our part.”