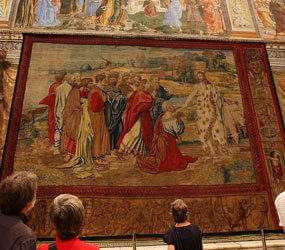 VATICAN CITY – Like long-lost twins, two halves of an artistic masterpiece conceived by the Renaissance master Raphael will be reunited for the first time.

The Vatican Museums and London’s Victoria and Albert Museum will exhibit side-by-side some of Raphael’s enormous tapestries for the Sistine Chapel and his preparatory paintings. The joint initiative is meant to coincide with Pope Benedict XVI’s first visit to the United Kingdom in September.

Since the Renaissance, “the cartoons and the tapestries have led separate lives” and the Sept 8-Oct. 17 exhibit will bring together “the two halves of the same story,” Mark Evans, senior curator of the Victoria and Albert Museum, told Catholic News Service July 14.

Reuniting the two halves will help people “contrast the two designs” and help them “understand how (Raphael’s designs) matured, developed and were finalized over time,” he said.

To celebrate the initiative, the Vatican invited a select group of guests to preview the tapestries before they were shipped off to London for the special exhibit.

To make the event even more unique, for one night only – July 14 – six of the tapestries were hung exactly where they were originally designed to be placed: on the lower walls of the Sistine Chapel.

It was the first time in 30 years the tapestries hung from their original 16th-century location.

Michelangelo completed the Sistine Chapel ceiling in 1512. When Pope Leo X was elected the following year, he wanted to leave his mark on the chapel, but every surface had already been painted.

He decided to commission a special set of tapestries for the chapel’s lower walls, whose panels had already been adorned with “trompe l’oeil” drapery. Tapestries were a popular art form at the time and the church liked to use them for special liturgical ceremonies.

Pope Leo wanted a high-caliber artist to create designs that would be up to snuff to share the same space with the masterpieces of Michelangelo, Pietro Perugino, Sandro Botticelli and Domenico Ghirlandaio.

He called the young and rising star, Raphael, and paid him 1,000 gold ducats for 10 designs.

Because the designs would be sent off to famed tapestry artisans in Belgium, Raphael had to color them exactly like a painting so weavers would know what precise hues to use. That unique kind of detail meant the cartoons eventually became prized works of art in and of themselves.

Once in the hands of Flemish weavers at Pieter Van Aelst’s workshop in Brussels, the cartoons were cut into strips. They were copied and woven from behind so the cartoon displays the reverse image of what’s on the tapestry’s front.

Flemish weavers were highly regarded artists and had no qualms about “improving” Raphael’s designs, said Evans.

For example with the design, “Feed My Sheep,” the weavers did not like having Jesus wear a plain white robe as Raphael had indicated, so they embellished the robe with gold stars, said Evans. They also did not think Peter should be wearing blue and yellow, so they made his garment a rich red, which was considered a much more regal and sumptuous color, he said.

The tapestries cost 1,600 gold ducats a piece – an enormous amount of money because of intense labor involved and the expensive materials used like real gold and silver thread. The total cost for the 10 designs and tapestries were five times the amount Michelangelo was paid for decorating the Sistine Chapel ceiling.

Seven of the tapestries were completed and sent to Rome in 1519 and the last three arrived in 1521, right before Pope Leo died in December and one year after Raphael passed away.

The tapestries depicted the lives of Sts. Peter and Paul and events from the Acts of the Apostles. They also were designed to specifically correspond to the frescoed images of the lives of Moses and Jesus.

People who saw them were struck by the huge range of colors and incredible detail the Flemish weavers had achieved.

Evans said because this was the only tapestry series Raphael ever designed, the Sistine Chapel tapestries “are fundamental to the history of tapestry design.” He said it was “hugely important” that the designs and the tapestries be brought together, even just temporarily.

Even though it is the first time the tapestries will be shown in the United Kingdom, they have traveled a great deal, albeit under rather unfortunate circumstances.

First they were stolen during the Sack of Rome in 1527. By 1536, seven of the 10 tapestries made their way back home. Pirates got hold of the ones still MIA, and some ended up in Tunisia and Turkey.

The tapestries eventually were recovered in Venice in 1554 but were not in the best of shape, said Anna Maria De Strobel, an expert in medieval, Byzantine and modern art at the Vatican Museums.

Others were snatched again from their home in 1798 during the Napoleonic Wars. It took the diplomatic finesse of Pope Pius VII’s secretary of state to wrangle for their return in 1808.

Today, 500 years and probably thousands of miles later, all 10 tapestries are safely back in the hands of the Vatican – most in remarkable shape despite their ordeal.

From Brussels, the cartoons made their rounds as kings and other royalty wanted weavers to copy the designs for their own set of tapestries.

Eventually in 1623, before becoming king, Charles I of England bought the seven Raphael cartoons that had resurfaced in Genoa, Italy, and paid a total of 300 pounds for them. They became, as they are to this day, the property of the British royal family.

Coinciding with Pope Benedict’s visit to England in September, the exhibit is meant to be a visible sign of the coming together of the two countries’ common cultural heritage, said Arnold Nesselrath, director of the Vatican Museums’ Byzantine, medieval and modern collections.

Seeing the cartoons alongside the final product is considered to be a once-in-a-lifetime event, he said; “it was something not even Raphael ever got to see.”