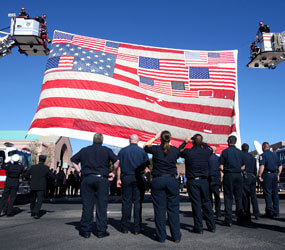 TUCSON, Ariz. – Christina Taylor Green was memorialized for her love of sports, her excitement about her many interests, from politics to dance, and for affecting the whole country, as her father put it at her Jan. 13 funeral.

U.S. District Judge John Roll was recalled a day later for his judicial evenhandedness, for his faithful involvement as a lector and daily Massgoer, a fourth-degree member of the Knights of Columbus and as a strong supporter of a wide range of church and civic activities.

The two were among six people murdered in a shooting rampage in Tucson Jan. 8, both remembered at funeral Masses at St. Elizabeth Ann Seton Church, SEAS as it’s known, on the city’s north side. Their own parish churches, St. Odilia and St. Thomas the Apostle, respectively, were too small to host the congregations, which still filled to overflowing the sanctuary at the much larger church.

St. Odilia did host a Mass of commemoration and healing celebrated by Tucson Bishop Gerald F. Kicanas Jan. 11. On Jan. 15, the ABC News program “This Week With Christiane Amanpour” taped the show airing Jan. 16 at St. Odilia. It was done in a town hall-style format at the church, where Amanpour observed, “You could hear the gunshots from here.”

Funerals were held in the following days for the other four people killed at a shopping mall during a meet-your-congresswoman event hosted by Rep. Gabrielle Giffords, who was among 13 people wounded. Bystanders, some of whom were injured themselves, tackled the gunman. Jared Lee Loughner, 22, was being held in federal custody in Phoenix, charged with federal crimes related to the deaths of Roll, chief judge of the U.S. District Court, Giffords staff member Gabe Zimmerman and the shooting of Giffords and two other congressional employees. State charges were expected to follow related to the deaths of Dorwan Stoddard, Phyllis Schneck and Dorothy Morris, and the shootings of 10 other people.

Before the funerals at St. Elizabeth Ann Seton Church, thousands of people lined the streets. Most just stood silently. Some carried single flowers. Others wore angel outfits, with large wings outspread, originally designed to block the view of protesters who planned to be there. Two hundred motorcyclists and hundreds more who walked, took shuttle buses and parked blocks away joined them. The protesters backed down after radio stations in other cities agreed to give them air time.

In his homily at Christina’s funeral, Bishop Kicanas compared the girl’s lasting impact on the world to that of another child who was doing things unexpected at his age: Jesus at 12 going to teach at the temple.

While she was “just 9, she has found her dwelling place in God’s mansion,” the bishop said.

Even with her death, the bishop said, Christina was able to save lives, as her parents donated her organs to others.

Local news reports said about a quarter of the congregation was made up of children, from the children’s choir at St. Odilia’s where Christina was a member, from her school, neighborhood and various activities she had.

Her simple, small casket was made by request by Trappist Caskets of New Melleray Abbey in Iowa. Each family member was given a cross made from the same red oak used for the casket.

Bishop Kicanas also participated in the funeral for Roll, whom the bishop considered a friend.