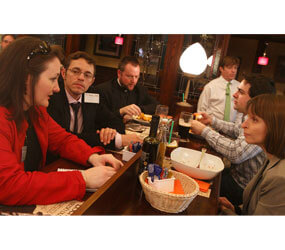 VATICAN CITY – Some things just can’t be done online. Like shake the hand of a blogging Benedictine nun (aka @Digitalnun on Twitter) and get her advice on how to create a profitable app with no start-up money.

Or drink prosecco, nibble on focaccia and discover while chatting with a scientist who blogs about biology and religion that he is a Protestant married to a Muslim and couldn’t believe he was invited to a Vatican event.

At a landmark “Blog Meet,” the pontifical councils for culture and for social communications brought together 150 bloggers – in the flesh – from all parts of the world May 2 to get a sense of their hopes and concerns. Once again, the church insisted the virtual world should only be a tool, not a substitute for, real human contact, even when the meeting underlines the extraordinary powers of new media.

Greeting people face-to-face also broke down some barriers and suspicions that have built up over the years between some bloggers and the sometimes communication-challenged Catholic hierarchy.

And create communion they did; the St. Peter-meets-tweeters blognic was a real coup – a mini Berlin Wall knock-down – as calling cards, emails and hugs were exchanged.

“The church has something to learn from bloggers,” Archbishop Claudio Celli, president of Vatican’s communications council, said in an interview with L’Osservatore Romano May 5.

By listening to inhabitants of the blogosphere, the church can learn not only what people in the pews are thinking and feeling, church leaders can get a sense of how important it is to speak about the faith in a language that is less “ecclesial” and more “understandable,” he said.

Of the many issues brought up during the four-hour meeting was defining what, if any, kind of relationship should exist between the church and bloggers.

That issue took on several forms.

On the one hand, some bloggers wanted to be on par with traditional media professionals and be included in the Vatican press hall loop when important news was set to break.

Jesuit Father Federico Lombardi, the Vatican spokesman, said only accredited journalists who have been vouched for by their employers and have pledged to follow journalistic ethics have that kind of access.

However, he said, bloggers have played a key role in clarifying the kind of mistakes and confusion that result when the secular press gets a story wrong.

Other bloggers expressed concern about authenticity and wondered if there could be some kind of “imprimatur” to show when online content reflects the faith. Others were quite happy to be left alone and exercise their freedom of speech unfettered by authority.

For the Vatican, the idea of “authenticity” is critical. The faithful need to know whether what they are reading is church teaching or someone’s personal interpretation or opinion.

In fact, the church’s initial wariness of the online medium may have stemmed from fears that the malleable and viral nature of digital texts meant church teachings could become diluted, polluted or convoluted when they hit the Web.

During a question-and-answer period at the end of the meeting, one audience member from the United States asked if there was a plan to create a sort of “mechanism” through which dioceses would be able to judge or control whether content coming out of Catholic newspapers, television outlets and blogs represented the “authentic teaching” of the church.

Another audience member spoke out against such a plan, saying many Catholic blogs are not connected to the church and want stay independent and free from regulation and Vatican or diocesan approval.

The panel made up of Vatican officials wasn’t able to address the concerns because of a lack of time. However, it was made clear at the beginning of the event that the Vatican’s goal with the meeting was not to regulate bloggers nor create a moral code of conduct, but rather to take the first step in starting a dialogue and looking at how blogging plays a role in speaking about faith.

Archbishop Celli said he hoped the dialogue would continue after the May 2 meeting and called on bloggers to take the next step.

Hilary White of the blog Orwell’s Picnic was already ahead of the game. She had scheduled an “alternative” blognic for May 3 to give bloggers who didn’t get invited to the Vatican Blog-stock a chance to meet and talk in a much more informal setting – specifically at an Irish-themed pub.

One of the most distinctive contrasts between the two gatherings, aside from the bar stools and beer, was the near total absence of clicking keys and heads hiding behind laptop screens.

People at the Vatican event were so connected to their mobile devices that the venue’s bandwidth was too saturated to operate smoothly.

When Thaddeus Jones, an official at the social communications council, was ready to show off a new Silverlight video player for a Vatican news portal, nothing but black hit the screen.

One person said it was “a Steve Jobs moment” referring to a similar glitch in 2010 when excessive Wi-Fi network congestion prevented the Apple CEO from showing off the new iPhone features at the product unveiling.

Maybe the old-fashioned pub décor inspired an old-fashioned tradition of just “sitting around and talking,” but it also showed that the Vatican blog meet was the catalyst it wanted to be for new pockets of dialogue to sprout up.