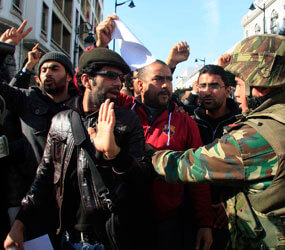 JERUSALEM – Despite hopes that calm would return to Tunisia following a violent weekend after the fall of the Tunisian government of Zine el Abidine Ben Ali, demonstrations and violence continued.

“There was resistance for years, but nobody expected this thing to happen so quickly and so violently,” Archbishop Maroun Lahham of Tunis, Tunisia, told Catholic News Service in a phone interview Jan. 17, three days after the government was toppled. “But it seems that people were really oppressed and tense and things just exploded. The whole world saw Tunisia as calm, but it happened.”

Life had been returning to normal in Tunis and other cities before Prime Minister Mohammed Ghannouchi announced his unity Cabinet, which included some members of Ben Ali’s ruling party, the archbishop said. He said only 30 of the 300 parishioners attended Mass Jan. 16 because of the looting and mayhem in the city a day earlier.

The ejection of Ben Ali’s government and his expulsion from the country was the culmination of four weeks of protests that left nearly 80 people dead. The archbishop said protests began because of the high unemployment rate but quickly changed in nature.

Archbishop Lahham said the Christian community – primarily non-Tunisians – was not targeted during the riots and looting, though members of the community were frightened because they were not used to such violence taking place in Tunisia.

“I am used to this because I lived in Bethlehem,” said the archbishop, former rector of the Latin Patriarchate seminary in Beit Jalla, West Bank. “But people were a bit afraid because the security was not (the) security (they are accustomed to) and there was fighting ….”

A former French colony, Tunisia had a relationship with the Catholic Church for several hundred years, and in the 2009 interview church officials told CNS the familiarity was one factor in Tunisians’ comfort level with the church.

The 22,000 members of Tunisia’s Catholic community come from some 70 countries in Europe, Africa and around the world, Archbishop Lahham told CNS. He said there are fewer than 200 Catholic religious in the country; most are involved in education, child care and health care. With the exception of the foreign Catholic community, all of the people they serve are Muslim.