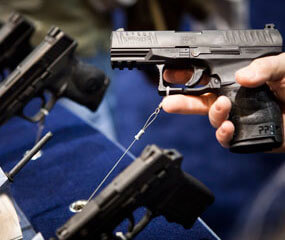 “I rarely ever conceal and carry, but sometimes if I’m in a very bad area, I do take protection,” he said. “I tell people all life is sacred, including mine.”

A few states away, Father Theodore Parker said he knows he has the constitutional right to own a gun, but can’t see any reason why he would. The pastor of two inner-city Detroit parishes said, “The real purpose of a gun in our culture is violence.” And there’s just too much of that, he contends.

One point on which both priests agree is that personal responsibility is mandatory for those who possess firearms.

The shooting rampage at U.S. Rep. Gabrielle Giffords’ Jan. 8 community meeting in Tucson, Ariz., which left Giffords and 12 others wounded and six dead, has renewed debate on gun control.

Activists cite New York City Mayor Michael Bloomberg’s report that investigators bought semi-automatic weapons without undergoing criminal background checks at a Phoenix gun show two weeks after the Tucson shooting. They are using the gun show example as a way to try to pressure President Barack Obama to weigh in on whether he plans to seek stricter gun control. So far he hasn’t had addressed the issue.

While bishops across the nation have decried the violence, few have recently addressed the issue of gun control.

In a phone interview with Catholic News Service, Tucson Bishop Gerald F. Kicanas said, “Whenever there’s a tragedy, we look at what can be done, what we can learn from it and that’s where we’re at in this time of grieving and sadness.” He said he and other Tucson community leaders are “taking the time to assess what we should do and the directions taken.”

Bishop Kicanas said he first heard of the shooting on CNN while in Jerusalem. “You don’t expect something like that to happen in Tucson – and especially to hear names of people you know,” he said. The bishop was a friend of U.S. District Judge John Roll, who was killed, and is an acquaintance of Giffords.

Father Parker and the 400 members of St. Cecilia’s, one of his parishes, have targeted street violence by pitching in their own money, working with police and hosting three gun-buyback programs in recent years.

Most of the guns they bought back “for a very low price of $20,” came from the area, which he described as “poor, mostly African-American, not many businesses.” The buybacks, he told CNS, are “letting people be freed from their worry and freed from the consequences of what could happen to them.”

John Snyder, founder of the Washington-based St. Gabriel Possenti Society based in Arlington, Va., also uses the freedom theme when he talks about guns. But his intent is very different. Gun ownership, he said, “is a way for people to maintain their freedom. It’s a way for people to protect themselves from a criminal.”

He said he has spent 44 years in support of the right of firearms owners and 22 years trying to get the Vatican to name St. Gabriel Possenti as the patron saint of handgun owners.

“With patron saints for so many activities, and even people with diseases, there should be a patron of handgunners,” said the lifelong Catholic and former Jesuit seminarian.

This year the society plans to mark St. Gabriel Possenti’s feast day, Feb. 27, by urging Catholic firearms owners to put one of their website coupons (www.gunsaint.com) in the collection basket. The coupon states: “Millions for charity but not one cent for gun-grabbing church bureaucrats.”

In that November 2000 document, the bishops called for “sensible regulation” for guns: “As bishops, we support measures that control the sale and use of firearms and make them safer – especially efforts that prevent their unsupervised use by children or anyone other than the owner – and we reiterate our call for sensible regulation of handguns.”

Louisiana’s bishops agreed to ban concealed handguns in churches following a 2010 law that also gave those in authority over places of worship the power to decide whether to allow them.

“There was no reaction whatsoever” to the bishops’ decision, said Danny Loar, executive director of the Louisiana Conference of Catholic Bishops. Louisiana is a stronghold for the National Rifle Association and one of the license plate offerings is “Sportsman’s Paradise,” a testament to the state’s hunting and fishing culture.

Guns in worship places was also the focus of a federal court action in Georgia earlier this year. The court dismissed a lawsuit brought by GeorgiaCarry.org and a Baptist minister challenging the U.S. Supreme Court decision allowing states to legislate their own firearms possession laws. Francis J. (Frank) Mulcahy, executive director of the Georgia Catholic Conference, said bishops there “haven’t taken a position on it one way or another.”

In terms of guns and violence, studies have shown there’s not much evidence that states with tough gun control laws have fewer gun crimes, said Bob Homant, a professor of criminal justice at the University of Detroit Mercy in Detroit.

“It probably helps a little bit in terms of individuals buying guns in the heat of the moment, if there’s an immediate crisis or a problem they are facing. But if guns are tight, they might settle for a knife” or any other weapon.

“Criminals aren’t going to get their guns through legal means,” said Father Classen. “Evil lies in one’s mind and in one’s heart … so it’s not a matter of demonizing one particular inanimate object.”

Homant said the real issue is why someone buys a gun. “We can do a better job as a culture of exploring our own reasons for wanting guns,” he said.

Gun ownership is also a question of morality, said Father Parker. “One has to be very careful and you have to search your conscience as to why you need it.”