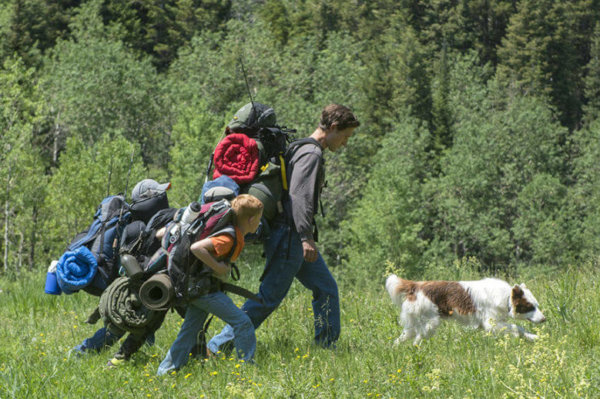 For a lot of people, surviving getting struck by lightning might be enough to change their life. Hollywood writer and director Mitch Davis lived through such an ordeal, but in the mind of Davis and his family, that’s not what turned their life around.

It was a stray dog named Pluto.

Pluto is immortalized in a movie opening in early October, “The Stray.”

“This movie actually tells a true story from my own family’s life of a period when I was working at a major film studio. Our life was crazy hectic, our marriage and family were suffering and a stray dog adopted us,” Davis said in an interview for the radio show “Catholic Baltimore.”

He said that for many families, stress takes its toll early on in a marriage with financial concerns, career crises, marriage difficulties and dealing with young children.

At one point. he suggested getting a dog, to help the children. His wife, Michelle, was not in favor of it, but she had read an article that said strays are the best kind of dog for a family. Shortly thereafter, a stray followed their son, Christian, home.

He would not say that adopting a stray dog will help every family. “I just know that in our case, we were in all kinds of in trouble; we were all praying for help. And in answer to our prayers, God sent a dog. I can’t say that it’s always positive for everybody. But in our case, it certainly was a blessing.”

Davis and his wife, played in the movie by Michael Cassidy and Sarah Lancaster, are seen leading their family in prayer and making faith a priority for them. The movie became a family project of sorts, with his son, Parker, co-writing the script; music by son, Christian; and other Davises behind the scenes.

“The Stray” is a tribute to the dog who pulled together a family, and shows how families work through the good and bad times.

“Pluto was a fantastic healer,” Davis said. “He just had this knack for knowing who was stressed, who was in pain, who needed to have his head in their lap.”

Pluto would be waiting on the front porch with a ball when Davis came home from work at 3 a.m., “so that’s what we would do. He just kind of taught us all to slow down and smell the roses a little bit. And then he taught us even more when things got really dramatic on the mountainside.”

Davis said he hopes that families that see the movie will be reminded there is a God who loves us no matter where we are, no matter our circumstances.

“We might be on a mountainside in Colorado having been struck by lightning – paralyzed and dying; we might be a single mom in our city trying to make the rent every month. God knows us and loves us and will help us reach out to him. He might send us a stray dog. He might send an angel in a surprising form,” he said.

Listen to the full radio interview with Mitch Davis on “Catholic Baltimore.”