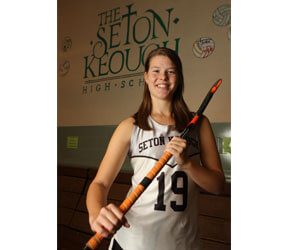 Ashley Triplett humbly wondered three years ago how she made the Seton Keough varsity field hockey team as a freshman, as her experience consisted of one season playing the sport and a few camps.

Yet, she was surrounded by three classmates – Meredith Andrews, Lauren Siekierski and Megan Woods. They were, as Triplett calls them, “the core of four.”

“It was nice to have people my age on the team and nice to have older kids to show us how it was done,” Triplett said.

Now the core serve as senior mentors in a program that reached the Interscholastic Athletic Association of Maryland B Conference playoffs.

“Being with them really promotes this sense of family,” said the parishioner of Catonsville’s St. Agnes. “They’ve always been my friends at school.”

Triplett, team captain for the second straight year, transitioned to center midfield after years of playing defense. She views the field well and looks to distribute the ball to scorers. She enjoys the same things in the sport that appealed to her when she started playing during 8th grade.

“I like the speed of the game,” Triplett said. “It’s a quick-moving game. It’s always exciting.”

Triplett thrives in the classroom. She has a 4.13 grade point average, is ranked No. 7 in her class and takes four advanced placement courses. She is a member of the student council, the National Honor Society and Math Honor Society. She also runs for the outdoor track and field team.

“As soon I get home, I get started on my homework,” she said.

She hopes to play field hockey in college, either at the intercollegiate or club level. Triplett is considering Maryland, Delaware, Clemson, James Madison and Virginia Tech, among others.

An avid watcher of television shows “NCIS,” “CSI” and “Criminal Minds,” Triplett hopes to work for the FBI.

Until then, she’s enjoying her time at Seton Keough.

“It’s a great school,” she said. “I can find my niche, there are great teachers and they’ve really prepared me for moving on to the next phase.”