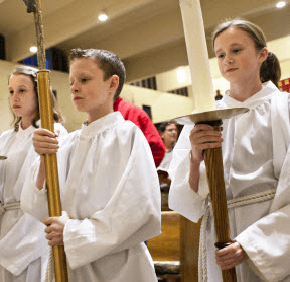 ELLICOTT CITY – Michael Taylor is an extraordinary minister of holy Communion and usher at Church of the Resurrection, but his service there doesn’t end with the Mass.

Afterward, he stays to tidy up. Some little helpers – his 11-year-old triplets – noticed his example and stepped up without being solicited to do so.

“I would help a couple of the folks at the end of Mass make sure the chalices were cleaned and put away,” Taylor said. “They (his children) hung around and wanted to help. That doesn’t surprise me; that’s typical of the kids. It’s not surprising that any of them would have chosen to have become an altar server.”

The three Taylor children – Emily, Katherine and Michael Jr. – often serve together at the 5:15 p.m. Sunday Mass, which the family attends. At least one of the three serves nearly every week.

Sixth-graders at the adjoining parish school, Resurrection-St. Paul School, the Taylors are scheduled to serve for the first time at a school Mass Jan. 7. In the interim, the triplets are hopeful they will serve together at a Christmas Eve Mass.

Katherine was inspired by her father’s service.

“It made me want to be a part of the Mass and help the priest,” she said.

“It makes me feel like I’m a part of the Mass and needed in the church,” Michael said of his service at church.

Monsignor John A. Dietzenbach, pastor of Church of the Resurrection, said the triplets are “the kind of kids who step forward rather than be asked to. Having known their father, I can certainly see where it comes from.”

He added that it’s “very unusual” to have triplets as altar servers.

Since becoming an altar server in September, Emily feels “like I know the priest better, someone I can go to if I need help.”

Their mother, Jean Taylor, said the triplets took the initiative and “asked several times” if they could become altar servers.

“It’s really nice to see they’ve volunteered on their own,” she said.

To become an altar server, youths must be in fifth grade and attend a day-long training course.

“They operate very, very well together,” Father Tanghe said of the trio. “My impression of the triplets is that they’re very good learners; they have a firm grasp of what they’re supposed to do.”

Before piling into the car for the 10-minute drive from home to church, Emily said, “we work out what we’re going to do.”

“They put on their serious faces (during Mass),” their mother said. “It’s a big, important job to them. They’re like a well-oiled machine.”