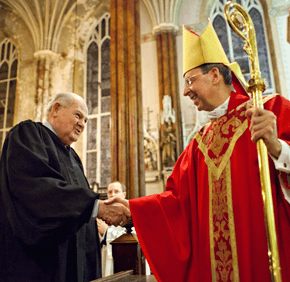 By Maria Wiering
mwiering@CatholicReview.org
Twitter: @ReviewWiering
Catholics in Maryland’s legal community gathered Dec. 4 at the Shrine of St. Alphonsus, Baltimore, for the annual Red Mass, hosted by the St. Thomas More Society of Maryland. Baltimore Archbishop William E. Lori presided at the Mass, which prays for lawyers, justices, elected officials and others involved in the administration of justice.
The Mass and following reception drew about 90 attendees, a number that pleased the society’s president, Michael May, an attorney in private practice in Parkville and parishioner of Immaculate Conception, Towson.
The event is usually held at the National Shrine of the Basilica of the Assumption of the Blessed Virgin Mary, but was relocated because the church is undergoing repairs to damage caused by last year’s earthquake.
“I would hope that we would instill a deeper faith in lawyers, and have them practice in a manner that is consistent with Catholic values,” May, 65, said of the Mass.
In his homily, Archbishop Lori spoke of the importance of the Year of Faith, which Pope Benedict XVI initiated in October to promote evangelization.
“The pope is not proposing that the Gospel be reinvented to make it more palatable,” Archbishop Lori said. “Rather he urges us to probe more deeply what the church believes and teaches, so that we might grasp more profoundly the depth and beauty of the faith and then allow it to touch and transform us in the depth of our being.”
Archbishop Lori pointed to the oft-cited American metaphor of “a wall of separation of church and state,” which “will probably continue to play a defining role in our national discussions,” he said.
Such a wall, however, cannot exist in Catholics’ hearts and minds, he said.
“A person of integrity cannot compartmentalize beliefs and values. Nor should we ever be asked to leave our faith and values at home when we are engaged in professional life, including the administration of justice,” he said. “That is why we celebrate this Red Mass.”
He added that Catholic legal professionals should ask the Holy Spirit to reveal to them “the bigger picture.”
“A certain profound simplicity needs to characterize our interior lives so that in our friendship with Christ we also may know what is really important – first and foremost, the priority of allowing the Lord to bring us safely to salvation and then, in the light of his love, the work of creating a society that is loving and just,” he said.
Concelebrating the Mass were Monsignor James P. Farmer, pastor of St. John, Westminster; Father John “Jack” B. Ward, pastor of Prince of Peace, Edgewood; Father Gregory Rapisarda, associate pastor of the Dundalk Cluster (St. Luke, St. Rita, Our Lady of Hope and Sacred Heart of Mary); and Father Joseph Marcello, secretary to Archbishop Lori.
Monsignor Arthur W. Bastress, St. Alphonsus’ pastor, directed the choir.
Monsignor Farmer and Fathers Ward and Rapisarda practiced law before their ordination to the priesthood.
Monsignor Farmer, chaplain of the St. Thomas More Society, said the organization and Red Mass provide support for lawyers, who deal with ethical and moral issues daily as they make difficult decisions about people’s lives.
“To be able to help these people is a great blessing,” said Monsignor Farmer, who was a criminal defense attorney for five years.
Among the Mass’ attendees were Robert Cannon, a partner at Saul Ewing in Baltimore, and John Gontrum, a partner at Whiteford Taylor Preston in Towson.
“It’s very important for the legal profession and government to celebrate and to recognize the importance of the spiritual purpose behind what we do – to serve God and fellow man,” said Cannon, 81, who has practiced law for 59 years.
The Red Mass provides a “bonding experience” for Catholics in the legal profession, said Gontrum, 61. “It’s good to realize the legal profession really is a profession, but it’s a family.”
Following the Mass, the St. Thomas More Society held a reception honoring Archbishop Lori, where members presented him with a print of St. Thomas More drawn by a local artist.
As chairman of the U.S. Conference of Catholic Bishops’ Ad Hoc Committee for Religious Liberty, Archbishop Lori has been the face of the Catholic Church’s efforts to protect religious freedom in the United States, including last summer’s Fortnight for Freedom.
The Fortnight began on the eve of the Feast of Sts. John Fisher and Thomas More, martyred separately in 1535 after refusing to recognize King Henry VIII as the head of the Church of England. Lord Chancellor of England before his death, St. Thomas More is the patron of lawyers.
“What a coup for the archdiocese, to have him (Archbishop Lori) as our shepherd, particularly at this time, because there are so many difficult issues – freedom of conscience, immigration, gay marriage,” said May, who has practiced law for 32 years. “To have this archbishop at this time in our history is tremendously beneficial.”
Copyright © December 5, 2012 CatholicReview.org
PrevNext