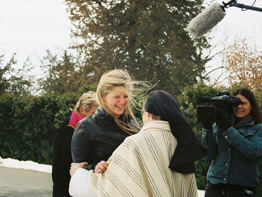 DUBUQUE, Iowa – Our Lady of the Mississippi Abbey, near Dubuque, is known for the lives of prayer the Trappistine Sisters lead there and for the delicious caramels they make. Now an even wider audience will get a glimpse into their lives.

A four-part television series, “The Monastery,” filmed in Dubuque a year ago, will be shown on the TLC cable channel. It was to debut at 2 p.m. EDT on Easter, April 8, and continue for three more Sundays at the same time.

Five women who answered a casting call were chosen to spend 40 days and nights in a women’s monastery somewhere in the United States.

That “somewhere” turned out to be Our Lady of the Mississippi. The entire 40 days were filmed. The finished product is a companion to “The Monastery” series filmed at the men’s Monastery of Christ in the Desert in Abiquiu, N.M., shown last fall on TLC.

After a similar series on monasteries was televised in England, letters of invitation were sent to all U.S. men’s and women’s monasteries by the Tiger/Tigress Production Co. looking for willing candidates for a series in this country.

“The productions in England were very successful,” said Mother Gail Fitzpatrick, former abbess of the Dubuque Trappistine Community. “There was a huge turnaround in interest in the church and religious life.”

Then one day, the Dubuque abbey received a phone call. “I think we were approached because our community has many younger members, and a production like this needs that energy,” said Mother Gail.

That was the beginning of a three-month process of intensive prayer, dialogue and visiting with the producer, Sara Woodford, before the community came to a consensus and agreed to be filmed. Mother Gail also had been encouraged to participate by colleagues in other countries.

“Seeing the wonderful video from England and hearing of the positive image of religious life it portrayed gave us a sense of trust” in Tiger/Tigress, she said. The agreement to have cameras rolling for 40 days in a contemplative religious community, while integrating five new women who had no experience of monastic life, was a huge decision.

“In prayer, we came to the decision,” Mother Gail told The Witness, Dubuque’s archdiocesan newspaper. “It is our belief that people who watch the program will have some sense of what our life is about and how contact with God is a way of living in hope. That was our main reason for doing it.”
Extensive preparations were made for the arrival of the women and the television crew. Each woman would have a mentor, but the Trappistine mentors were not assigned until the women arrived so personalities could be blended.

“Monastic life was a huge shock for the women,” said Mother Gail. “It was so different from their lifestyle and it took a tremendous amount of time and effort for them to adjust.” Plans made before the women arrived were revised almost daily. Some found the adjustment extremely difficult and came close to leaving.

“I really give the women credit for deciding to stay,” Mother Gail said. “They said they came to be part of this experience and eventually decided to stick with it. In the end, they were happy they stayed.”

For the first week, the women did not get up at 3 a.m. with the sisters. But from 5:30 a.m. on, they lived the life of the sisters: prayer, meals, manual labor, classes and, of course, some recreation.

One of the hardest adjustments was keeping silence. Only one woman was Catholic; two were Christian and the other two were nonbelievers.

“We didn’t have a common language, and that proved to be a great challenge,” said Mother Gail. “We were trying to express our values and beliefs in Jesus Christ, in God. We tried to speak of grace, heaven, redemption, etc., in a language they could understand.”

Classes on monastic life and basic Christian teaching were helpful, at least to a degree. In addition to the five participants, the six-member TV crew – all women – was on-site. “They worked hard – were on the cameras 12 hours a day,” said Mother Gail. “That mic(rophone) must have seemed very heavy for that long a time for the audio person!”

Today, crew members and participants remain in touch with the sisters.
“This is one way we could share some of our own joy in God and allow people to see it in action rather than just talking about it,” Mother Gail said. “Living totally in God is really worth the sacrifice and generates so much joy and hope in our lives.”