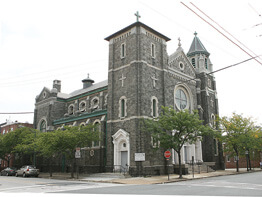 Since officially becoming Transfiguration Catholic Community in 2004, the southwest Baltimore parish has held Mass in all three of its churches.

Beginning in January, members of the parish will attend regular Mass only at St. Jerome at Scott and Hamburg streets, and future uses for St. Martin and St. Peter the Apostle remain uncertain.

When the entire parish is unified under one roof in the early days of 2008, the building currently called St. Jerome will have a new sign, “Transfiguration Catholic Community,” signaling the church’s name change, said Father Mark Carter, O.F.M. Cap., pastor of the parish.

The Transfiguration parish council and Father Carter spent the summer deliberating over which church building they would use to celebrate Mass, and by the beginning of August they settled on St. Jerome.

With only about 375 families within the Transfiguration parish, it became too costly to continue operating full pastoral services at all three church buildings, and earlier this year the parish council decided it was time to consolidate the congregations, Father Carter said.

While members of the three congregations said it was an emotionally charged choice, it was one they realized had to be made if their parish is to thrive and grow stronger.

Throughout the next year the parish will begin to move its administrative offices and ministries to the building that is now called St. Jerome, Father Carter said.

“We’ll be phasing in the transition,” he said. “Some of the ministries have already started meeting there and the Sunday school is already there. Our offices will take some time to move and the youth ministry will probably be there as early as October.”

Part of the changeover will involve mourning for the parishioners who now attend Mass at St. Martin and St. Peter the Apostle, who have a few months to say good-bye to the churches that have been part of their weekly worship for many years, Father Carter said.

“I’m attached to St. Mar¬tin’s, but I realize we have to go beyond the building and grow as a faith com¬munity,” said Jerome Towns, a Catonsville-area resident who has worshiped at St. Martin for nearly 20 years.

There are currently no plans to sell the other build¬ings, but to find efficient uses for them within the Transfiguration parish, said Bishop Denis J. Madden, urban vicar.

Portions of the rectories at St. Martin and St. Peter the Apostle already are being rented to outside parties and it’s possible Transfiguration will lease the two churches out to other faith communities, Father Carter said.

“We’ll use those church buildings for baptisms, weddings and funerals,” Father Carter said. “Any kind of sacramental celebration will continue. It’s up to the parish to decide how long that will continue.”
The pastor couldn’t rule out the possibility of a future sale of the buildings.

As January nears and the congregations merge into one at the current St. Jerome building, Father Carter realizes parishioners who currently attend Mass at St. Martin and St. Peter the Apostle will deal with detachment issues.

“Everyone is somewhat tied to a physical structure,” he said. “I have been expressing that church is the people and the community and that will continue on no matter where we move.”