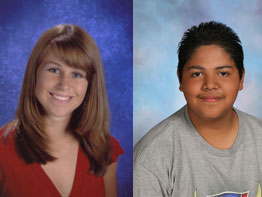 Father Terry Weik, S.M., counts her among the “most extraordinary” young people he’s ever met.

Emily Burke was an honor roll student, a violinist and a high school sports standout who played softball, soccer and indoor track. An active parishioner of St. Joseph in Sykesville, the 15-year-old also had a special knack for befriending everyone – traveling in many different circles while never becoming part of a clique, the St. Joseph pastor said.

Emily was killed in an April 5 car accident that also claimed the life of Rodolfo “Rudy” Calderon, a 14-year-old friend and member of All Saints Episcopal Church in Reisterstown who was traveling with her. While the sudden deaths of the two Liberty High School students came as a tremendous shock, it was also an opportunity for the faith community to pull together in support of the families, Father Weik said. Young people were especially touched and their faith reaffirmed in a special way by the outreach, he said.

“Ours is a God who brings goodness from tragedy and life from death,” said Father Weik, noting that he was “overwhelmed” by the outpouring of love for Emily and Rudy.

Thousands came to the wake and funeral services, Father Weik said. A Catholic funeral Mass was offered at St. Joseph for Emily, and the church was also the site for an Episcopal service for Rudy. A St. Joseph parishioner donated his catering services for the receptions.

Members of the Westboro Baptist Church, based in Topeka, Kan., threatened to picket the funerals because they believe the teens’ deaths were signs that God is “punishing Maryland.” The Westboro Baptist Church pickets the funerals of U.S. servicemen killed in Iraq, and the state of Maryland sought to keep them away from grieving families. The group, which believes God is sending death to Americans because of U.S. tolerance of homosexuality, never showed up. If it had, members of the Sykesville community planned to counter their protests with peaceful prayers, according to Father Weik.

Parish leaders distributed information via social networking sites and e-mail to answer the many questions that were circulating about the deaths and the protest group.

“We invited the people to act as Jesus would and return a curse with a blessing,” the priest said.

Tom Hild, youth minister at St. Joseph, said he was particularly touched by the way he noticed young people using their cell phones at the wake. As Emily’s friends gathered around the casket, he saw them talking on their cell phones and sending text messages. They were leaving messages for Emily – listening to her voice one last time and telling her how much they loved her. Mr. Hild noticed that Emily’s cell phone was in the casket and her parents took it home to listen to and save the many messages.

Parishioners made special meals for the Burke and Calderon families, and they offered numerous prayers. Many young people contacted the parish to ask questions about their faith, Mr. Hild said.

Emily’s confirmation class went on to receive the sacrament without her just a few weeks after her death. Many teens said the loss of their friend made them take the sacrament more seriously, Mr. Hild said.

Since then, the spring retreat tripled in size in just two weeks. The youth group attendance tripled and attendance for the 6 p.m. Sunday Mass, which is hosted by young people, also increased.

“In so many ways, this horrible tragedy has brought new life and light,” said Mr. Hild. “It has been a very tangible experience of paschal mystery for our community and youth.”

Tracy Burke, Emily’s mother, said her family is deeply grateful for the many ways the parish has supported them.

“It was absolutely overwhelming,” she said. “Everywhere I go, people stop me on the street and tell me they are praying for us.”