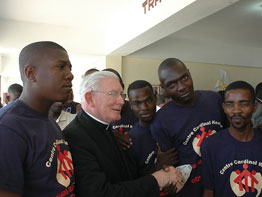 The Diocese of Gonaives, Haiti, showed its appreciation for Cardinal William H. Keeler by naming a newly built trade school after him.

The retired archbishop of Baltimore attended the dedication and cut the ribbon at the Centre Cardinal Keeler Ecole Technique de Bigot (Technical School of Bigot) on Feb. 23 as part of a four-day trip to Haiti. The prime minister of Haiti, Jacques Edward Alexis, attended the ceremony as well.

“I was sort of surprised,” Cardinal Keeler commented on having a school named for him. “I’m a little overwhelmed by it.”

The Archdiocese of Baltimore has an active sister parish program with Haiti, and through the efforts of the Missions Office supports a variety of educational initiatives.

“There are many calls on our charity, but none is more important than to help, especially during this Lenten season, the poorest nation in our hemisphere,” Cardinal Keeler said. “Therefore, I consider it very important for us to try to reach out for the needs in Haiti.”

He praised the work of Deacon Rodrigue Mortel, director of the Missions Office, who is a Haitian native, doctor and a deacon in both the Archdiocese of Baltimore and the Diocese of Gonaives.

Deacon Mortel, the former director of Penn State University’s cancer center, has established the Mortel Family Charitable Foundation, which works to provide basic sustenance and education to the poorest of the poor in Haiti.

Deacon Mortel explained that the school, which provides training for 200 students, was named for Cardinal Keeler because he approved efforts by the Missions Office to help after another charitable organization abandoned the project.

“The project was dead until he approved it,” Deacon Mortel said. “The project is a really necessary one because students who could not follow the academic track had no opportunity to learn a trade.”

The school, which opened this fall, is run by the Sulpicians.

Monsignor Robert J. Jaskot, chancellor of the Archdiocese of Baltimore, who accompanied Cardinal Keeler and Deacon Mortel, said it was his first trip to a Third World country.

“I was overwhelmed by the poverty,” he said. “To see it so entrenched and so systemic was overwhelming. But then you begin to see the good Dr. Mortel does, and the school.”

He believes the school will allow students to break the grip of poverty.

“This provides all different kinds of trade education,” he said. “Dr. Mortel is to be commended for his efforts.”

He praised Baltimore’s efforts on behalf of Haiti, known as the Baltimore-Haiti Outreach Project.

“It’s an amazing opportunity we have to share the blessings God has given us both through the Mortel Foundation and sister parishes,” he said.