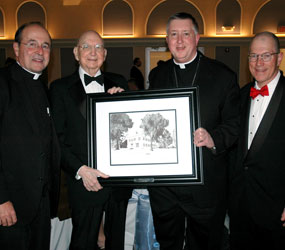 When 92-year-old Charles O. Fisher Sr. thinks back to his years as a student at St. John School in Westminster during the 1920s and 30s, nuns and trains come to mind.

The School Sisters of Notre Dame who staffed the school were an implacable force for bringing out the best in their students, while the trains were just about the only countermeasure that could momentarily derail them from their mission.

“We were next to Western Maryland Railroad,” remembered Fisher, a graduate of St. John’s elementary school and the now-closed St. John High School.

“As the freight trains would come up from Baltimore,” he said, “they would make a great deal of noise and the classes would have to stop.”

“There was a lot of finger slapping with rulers,” he remembered with a laugh. “Looking back, that wasn’t bad. At the time, I probably felt slightly different.”

Fisher credits his successful career in law and his commitment to charitable outreach to the educational foundation laid by the sisters. He continues to practice law in Westminster and is a founder of Carroll Hospital Center and a longtime member of the hospital’s board of directors. The hospital recently dedicated a new medical building in Fisher’s name.

St. John School honored Fisher for his years of service to his faith, his church and the greater community with the 2009 Distinguished Alumnus Award. Auxiliary Bishop Mitchell T. Rozanski was on hand Dec. 4 to present the award during St. John’s Inaugural Gala.

Fisher has remained loyal to his alma mater, with eight children, 15 grandchildren and six great grandchildren all attending St. John. What has made the school thrive over the years, Fisher said, is its twin focus on faith and academics.

“I had parents who wanted me to have a Catholic education,” said Fisher, a past Grand Knight of the Westminster Council of the Knights of Columbus.

“The life of the spirit is just as important, if not more important than the other life,” he said. “It gives such a basic framework that it grounds everything I do.”

The former altar boy remembered that the nuns emphasized the Baltimore Catechism and parish priests frequently visited the classroom.

“I have nothing but fond memories of the nuns and great appreciation for the principles they taught me,” he said.

St. John was a much smaller school when he was enrolled, with several grade levels combined.

“When the teacher was teaching one grade, we would be studying or doing an assignment in another grade – so we were actually learning two grades at once,” Fisher said. “As a result, I and a number of others who were up to it would move from one grade to the next in one school year.”

Fisher said he’s pleased to see that St. John has remained a strong force in Catholic education. It is today one of the larger Catholic schools within the Archdiocese of Baltimore.

Harriann Walker, principal of St. John, called Fisher a “reflection of his faith and a product of Catholic education.”

“He’s an inspiration,” she said. “He gives a clear awareness to the community at large of what St. John has contributed to Carroll County and to Westminster. He personifies everything that we as Catholic educators have tried to do.”