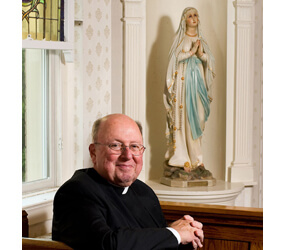 The parish of his childhood is also where the pastor of nine years retired, stepping down from his duties due to an ongoing battle with a neuromuscular disease.

“I grew up a seminarian thinking that as a priest you died with your boots on,” the 67-year-old priest said.

Monsignor Tinder once hoped to make a decision about retirement at 70.

He said his problems affect his strength and motion, but added now is not the time for sadness.

“We get so tied to this world with its shifting that we forget that we were made to go home,” Monsignor Tinder said. “The God who made us is holding us and carrying us home.”

Monsignor Tinder studied at St. Charles College, a former minor seminary in Catonsville, for six years before attending Mount St. Mary’s Seminary and University in Emmitsburg. He was the longest-serving member of that school’s board of trustees before stepping down recently.

He was ordained by the late Cardinal Lawrence Shehan in 1968 at the Cathedral of Mary our Queen, Homeland, at 25.

“I had arrived at a moment I had been looking forward to for so long and family and friends were surrounding me,” Monsignor Tinder said. “There are moments in your life when you have a sense of presence.”

Being a priest “was beyond my imagining.”

“The priestly ministry puts you on the edge of life with your community of believers,” he said. “You share with them in life, death, birth, happiness and sorrow. You offer forgiveness in moments of great pain. In many ways, it’s beyond articulation.”

He served St. Pius X, Rodgers Forge, for five years and then moved to the Archdiocese of Baltimore’s vocations office, running the mentor training program until the early 1980s.

He became pastor of St. Joseph, Fullerton, and served there for a decade, before transitioning to St. Jane Frances de Chantal, Pasadena, where he was pastor for 10 years.

“Each of those stops was beautiful and brought a new opportunity for learning,” Monsignor Tinder said. “You really do gain something every time. I would have missed something had I not had a chance to be at those places.”

Finally, he returned home to the parish which played such a vital part in his formation.

Immaculate Conception, parishioners said, became stronger as a community because of his leadership. They described him as bright, compassionate and kind and as a priest who engaged young Catholics in their faith while also delivering relatable homilies.

Monsignor Tinder made the tough decision to close parish-run Towson Catholic High School, which his siblings attended, during this past summer in response to overwhelming deficit issues and declining enrollment. The parish’s elementary school continues to thrive.

“These have been nine great years that I wouldn’t trade for anything,” Monsignor Tinder said.

“We’ll all cry,” longtime parishioner Jo Miller said. “It’s going to be very hard. It’s very hard to thank someone adequately for all they’ve done for you.”