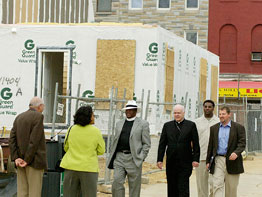 Moments before an 80-foot crane hoisted the second story of a new townhouse into its permanent position along Caroline Street in East Baltimore, Julia Matthews stood on the sidewalk and smiled.

The 80-something parishioner of St. Francis Xavier – located within walking distance of the rising Preston Place town house development – sees the construction as a harbinger of hope in a community working hard to break free of urban blight, drugs and violence.

This is the same Oliver neighborhood where drug dealers firebombed the home of Angela Dawson in 2002, killing seven members of her family in retaliation for reporting drug activity to the police.

“I am really glad and proud that something like this is happening in the inner city and people in the neighborhood will be able to buy a home that they couldn’t afford – a brand-new home,” said Ms. Matthews, who watched workers in hard hats bustle about the construction site May 8.

“I hope more neighborhoods in the inner city do this same thing,” she said.

The new houses are part of a 122-home development resulting from a partnership between TRF Development Partners and Baltimoreans United in Leadership Development (BUILD). Seventy-five of the homes will be built from scratch, with the remaining 47 to be rehabbed.

The Archdiocese of Baltimore made a $300,000 loan to BUILD in 1991 that was rolled over, supporting the interfaith social action group’s redevelopment efforts in the city. BUILD’s active membership includes about a dozen Catholic churches.

Archbishop Edwin F. O’Brien and Bishop Denis J. Madden, urban vicar, met with BUILD’s leaders May 8 at St. Peter Claver to discuss BUILD initiatives. They then visited Mary Griffin, a St. Peter parishioner whose 1,378-square-foot townhome in Sandtown-Winchester was erected several years ago in a BUILD construction project similar to the one rising at Preston Place.

“In my old house, there were vacant, boarded-up houses on each side of me,” explained Ms. Griffin. “I just love my new home. Now, I’d like to see the nice stores we had on Pennsylvania Avenue come back.”

Promoting neighborhoods is at the forefront of BUILD’s efforts, according to Rob English, the group’s lead organizer. It isn’t just about erecting buildings, he said. Each of the group’s member congregations works with neighborhoods to determine what issues are important to the community, he said.

“Until we radically reconnect with each other, we can’t change the city,” said Mr. English.

In Oliver, BUILD surveyed the community several years ago and discovered that about 44 percent of the neighborhood was abandoned, according to Mr. English. The congregations raised $1.2 million to buy vacant properties for new homes and millions more was raised from other groups, he said.

At Preston Place, the developer will provide home-ownership counseling and education workshops. Community leaders are looking at ways of introducing green space and markets.

Father Joseph Del Vecchio, S.S.J., pastor of St. Peter Claver and St. Pius V in West Baltimore, said BUILD’s development efforts make a definite impact. In Sandtown-Winchester, the crime rate has dropped on the block where new homes were erected. Last year, there were only eight or nine police calls on the developed block, he said, while the rest of the area saw 230 police calls.

Bishop Douglas Miles of Koinonia Baptist Church, one of BUILD’s leaders, expects the new development in Oliver to connect with the East Baltimore Redevelopment Project a few blocks away where thousands of new homes and a science and technology park are under construction.

After touring the Oliver construction site, Archbishop O’Brien said he was encouraged by signs of new life in the city.

“I see a lot of good will,” he said. “Many sides of the community are coming together to fulfill dreams. It’s very impressive.”

Ms. Matthews, the St. Francis Xavier senior who lauded the new development, seemed determined that improvements won’t stop once the houses are completed. As she watched construction workers prepare to ease a second story onto a new townhome, a friend warned that community leaders need to do something about the many liquor stores that still populate East Baltimore.