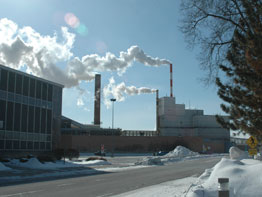 PORT EDWARDS, Wis. – The production of pulp and paper products is synonymous with the small Wisconsin town of Port Edwards.

Together with the other towns and cities in the La Crosse Diocese that straddle the Wisconsin River – including Nekoosa, Wisconsin Rapids, Stevens Point, Mosinee and Wausau – Port Edwards is and always has been a paper town.

Ever since Port Edwards’ first sawmill was built in 1840, the Port Edwards mill has always fed the town’s economy and provided its residents with jobs, as well as a source of pride and identity. Generations of fathers and sons have worked the same paper machines.

“When I was growing up, this was the job to get, and if you got it you were set for life,” said Esther Becker. She and her husband, David, who was hired at the mill nearly nine years ago, are members of St. Alexander Parish in Port Edwards.

“Set for life” is the case no more. The parish is trying to help families figure out how they’ll make ends meet when the mill closes down this spring. Its owner, Domtar Corp., announced the closure Dec. 13, although an exact date has not been set. The Canadian company cited a loss of profits and higher costs.

The decision wasn’t a shock to paper industry observers. “Port Edwards has old machines that are really beyond their lifetime,” said Gerry Ring, chair of the paper science department at the University of Wisconsin at Stevens Point. “They were old 22 years ago when I first saw them.”

Even so, the decision to shut down the mill entirely came as a blow to Domtar’s 500-plus Port Edwards employees. Among them was David Becker, an industrial electrician at the mill.

“We were assuming that there would be more layoffs, but this was a shock,” Becker told The Catholic Times, newspaper of the Diocese of La Crosse.

Now most of these workers in a town of 2,300 will have to find new jobs. Since Domtar owns the mills in both Port Edwards and Nekoosa, some longtime employees from Port Edwards plant will bump workers with less seniority at Nekoosa. All told, 500 of the area’s 1,000-plus Domtar jobs will be gone by summer.

Unlike some of his fellow employees whose background is exclusively paper-related, Becker’s electrical training gave him an edge in finding work. He made the difficult decision to leave Domtar for a new, lower-paying job offered to him in Weyauwega, more than 50 miles away.

“I’m living in a tiny, one-bedroom apartment and seeing my family on the weekends,” Becker said.

“I miss my dad and I can’t go to sleep at night,” said the couple’s 9-year-old daughter, Leah.

Like the Beckers, many of the mill’s employees are members of St. Alexander Parish, where Father John Swing has been pastor for 12 years. He also has been pastor at Sacred Heart of Jesus Parish in Nekoosa for 16 years.

“Right now we’re trying to make a list of everyone who is directly affected,” he said. So far, Father Swing has concentrated on education, compiling a list of 16 families who together have 32 children in the local Catholic schools.

“My goal is to help people learn to reach out to one another,” Sister Katherine said. “I’m hoping this can strengthen our faith community and help us realize a greater dependence on God.”

“There have been so many people praying for us,” she said. “Our faith community really has been there for us. People will call up and say they heard of a job opening.”

Wisconsin Gov. Jim Doyle said in a Dec. 19 statement he was “committed to helping this community and the hundreds of families who depend on the mill for their livelihood.” The governor issued a $25,000 startup grant to initiate services for workers.

Earlier in February, United Steelworkers Local 59, which represents 700 employees at the two mills, became the first union to broker a severance package deal. Steelworkers members account for 267 of the 500 jobs expected to be lost.

According to union president Jim Kizewski, a member of Sacred Heart Parish, the deal brokered in a 15-hour marathon session left much to be desired.