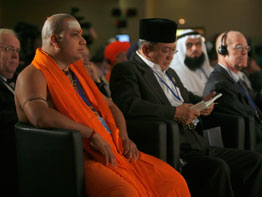 “The Holy Father believes that a dialogue founded on love and truth among the followers of Judaism, Christianity and Islam is the best way to help turn all peoples of the earth into one single family,” said Cardinal Jean-Louis Tauran, president of the Pontifical Council for Interreligious Dialogue. He spoke July 18 during closing remarks at the World Conference on Dialogue, a three-day meeting initiated by Saudi Arabian King Abdullah Aziz.

“Jews, Christians and Muslims show that religions are not a source of tension. On the contrary, they have a tremendous positive potential for the humanization of the whole of society,” Cardinal Tauran said, adding later that “all those who search for God have equal dignity.”

Representatives of other monotheistic religions, such as Buddhism, Hinduism and Shintoism, also attended the event.

The cardinal also defended religious liberty, saying it should include the opportunity to take part in the public profession of faith.

King Abdullah, who called Islam “a religion of moderation and tolerance” in his opening-day speech, is a Muslim whose country forbids the public practice of religions other than Islam.

King Abdullah asked them to “declare to the world that difference must not lead to conflict and confrontation and to state that the tragedies that have occurred in human history were not attributable to religion but were the result of extremism.”

Cardinal Tauran said mistakes of the past do not have to be repeated.

“Jews, Christians and Muslim do not believe in destiny. They know that, God having endowed them with a heart and intelligence, they can change the course of history,” he said.

The event, organized by the Muslim World League, was held outside the Spanish capital at El Pardo Palace, a site chosen for its historical significance. Jews, Christians and Muslims in Spain lived together in relative peace for a time in large Spanish territories once ruled by Muslims.

The conference addressed common concerns for all religions, such as morality and protecting the environment, while shunning talk of religious theology and politics.

“Mankind is suffering today from a loss of values and conceptual confusion, and … is witnessing a proliferation of crime, an increase in terrorism, the disintegration of the family, subversion of the minds of the young by drug abuse, exploitation of the poor by the strong, and odious racist tendencies,” King Abdullah said.

“This is all a consequence of the spiritual void from which people suffer when they forget God. … There is no solution for us other than to agree on a united approach, through dialogue among religions and civilizations,” he said.