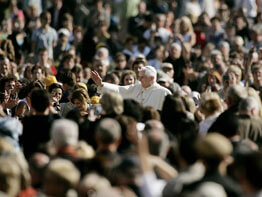 VATICAN CITY – Top officials of the U.S. Conference of Catholic Bishops met privately with Pope Benedict XVI Oct. 18 for a wide-ranging discussion about the church in the United States, including the pope’s planned visit to the U.S. in the spring.

Bishop William S. Skylstad of Spokane, Wash., conference president, said the discussion about the trip was “just in general.” Beyond the announced papal stop in New York, Bishop Skylstad said he could not provide specifics about the trip because “the details have not been nailed down yet.”

He did say, however, that he expected the trip to be brief, in keeping with Pope Benedict’s practice.

Bishop Skylstad told Catholic News Service he was joined at the meeting by Chicago Cardinal Francis E. George, conference vice president, and Monsignor David J. Malloy, general secretary of the conference. The conference officers usually meet twice a year with the heads of Vatican offices to discuss issues of common concern, and they meet the pope during their October trip.

The Spokane bishop said the officers thanked Pope Benedict for including two U.S. archbishops among the 23 churchmen he named cardinals Oct. 17. The two are Cardinals-designate John P. Foley, pro-grand master of the Knights of the Holy Sepulcher, and Daniel N. DiNardo of Galveston-Houston.

Bishop Skylstad said the naming of the first cardinal from Texas is an important recognition of “the significant Catholic presence” in the state and of the fact that Houston is now “the fourth-largest city in the United States.”

The three U.S. bishops’ conference officers had about 20 minutes alone with Pope Benedict, who is “always very affable and very gentle,” the bishop said.

The officers told the pope a little about the restructuring and downsizing of the U.S. bishops’ conference, said Bishop Skylstad, and “about the political responsibility statement we are working on,” a statement into which he said the bishops put a lot of time and energy in preparation for U.S. elections.

When asked if the officers discussed with the pope the debate over giving Communion to Catholic politicians who disagree with some church teachings, Bishop Skylstad said, “We did not discuss that issue specifically.”

The meeting also gave Bishop Skylstad an opportunity to tell the pope that a new conference president would be elected in November and allowed him to pass on to the pope an expression of “love and fidelity” from a special group of nuns in his diocese.

He said the pope was particularly pleased to hear that the 15 nuns formerly belonging to the Religious Congregation of Mary Immaculate Queen, part of a group of schismatic traditionalists based at Mount St. Michael in Spokane, had been received into full communion with the Catholic Church in late June.