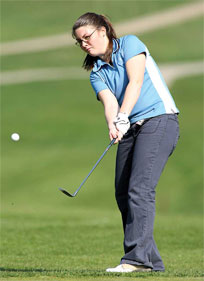 Kathy (Dukehart) Benzing, a 1960 graduate of Mount de Sales Academy, loves the game of golf. In fact, she’s been playing for 15 years and loves every minute of it.

This year, her passion for golf and the great outdoors has taken her in a new direction as she is now known as “Coach.”

Benzing said that Sister Elizabeth Anne, O.P., principal of the Catonsville all-girls school, had wanted to start a golf team for years and 2008 was their year to compete in the IAAM B Conference.

With 10 golfers on the team, four of them brand new to the sport, the Sailors are out to a remarkable start, with a 3-1 league record as of April 13. Their only loss came at the hands of the Institute of Notre Dame, Baltimore, who edged the Sailors 2-1 with a rematch coming next week.

The Sailors use Forest Park Golf Course for their nine-hole home matches and travel around the area for away matches – which could be a county or city course, or a lush, sprawling, country club setting.

Benzing is most excited about her No. 1 twosome, senior Carol Nettina and sophomore Maggie Andrews, who are undefeated thus far (as of April 13) in their match-ups. “These girls are very good players, but they made me nervous during our last two matches, winning the nine-hole game on the last hole with their last putt.”

The Sailors No. 2 twosome is seniors Becca Murray and Maria Malagari, who possess a strong long game off of their drives. The remainder of the team switches in and out for the third and final grouping for match play.

“I just love being around Mount de Sales,” said Benzing. “It’s such an uplifting feeling.”

Benzing went on to say that her players are mostly enjoying the on-the-course learning of the rules and course etiquette.

Though it has been a rainy and cold spring, the Sailors were able to get out to the driving range several times and get in a few practice rounds on their home course prior to the season getting underway.