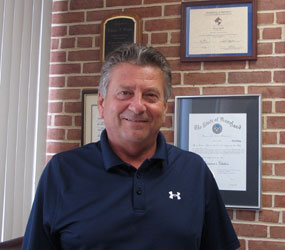 ARBUTUS – Harry Potter might have saved Hogwarts, but Tom Riddle still stands tall at Our Lady of Victory.

Tom Riddle has been a fixture at Our Lady of Victory School for 41 years, serving as a teacher, assistant principal and principal.

While Riddle shares the given name of Voldemort, the villain in the Harry Potter book and film series, the educator is really a mild-mannered man who wants everyone to feel at home in his school.

“The look and feel, just walking up to the building, is important,” said Riddle, 60, who greets visitors with a handshake and a smile and is known to answer the school phone on the first ring.

He knows impressions are made in seconds.

“It’s the environment,” he said. “It’s a place where people live and share their faith. We’re different and I think as long as we are different, we will always have students.”

Riddle said the school is entering the new school year with the theme of “Retain and Recruit.”

Keeping current school families happy while attracting new students is a challenge for all Catholic schools, including Our Lady of Victory.

Wendy Alley, a parent of four who have attended Our Lady of Victory, said that when she was looking for a school for her children, Riddle was “very friendly. He made me feel welcome.”

Riddle grew up attending the parish school at St. Bernardine in Baltimore City. While a high school student at Cardinal Gibbons, Riddle worked a part-time maintenance job, cleaning bathrooms and classrooms at Our Lady of Victory.

“I literally went from janitor to principal over a career,” he said.

It’s one that has been challenging and invigorating.

“I don’t feel I was called, but once I was sent, it’s where I wanted to be my entire life,” Riddle said. “A lot of it was God was pushing me.”

Riddle started teaching middle school classes at Our Lady of Victory when he was a 19-year-old college student. It might have been unconventional, but he remained a teacher as he finished his undergraduate work at what are now the Community College of Baltimore County Catonsville and Towson University.

The parish and school community began to see Riddle as a committed man who went to great lengths to teach subjects such as history, English and religion.

“Being young, the kids really responded to my approach,” Riddle said.

By 1975, he became a full-time assistant principal and in 1992 was named principal.

During his principal tenure, Our Lady of Victory has added a technology wing that is the envy of public and private schools in the area. Riddle has overlooked no aspect of his school, as he also led an effort to renovate the school’s bathrooms so that their décor matches those of a local restaurant.

Riddle said the stress principals feel today “is at an all-time high.”

“When I am most stressed, I go to the pre-K and look at those 4-year-olds and I just let it all out,” Riddle said. “No matter how bad I’m feeling, those few brief moments are gold. I love being with the kids.”

“He never talks down to them,” she said. “He just lets them know what’s right and what’s wrong.”

Riddle almost was separated from his school during the summer of 2010, as he was a passenger in a car struck on Coastal Highway in Ocean City.

He was taken to a Salisbury hospital with five rib fractures and two pelvis fractures. When he returned to the orthopedic doctor in mid-August 2010, Riddle was told to stay away from work for six more weeks.

“I’ve got a school year to start,” Riddle replied.

Days later, he was back at Our Lady of Victory with the aid of a walker.

“I needed to be with the kids and the faculty,” said Riddle, who worked hard to keep his emotions in check on the first day of school.

A year later, he’s healthy and recovered, ready to welcome children to class once again.

“There’s nothing like the first day of school,” he said. “There’s a moment, after all the kids have arrived and are in their classrooms, when the silence is deafening, and you know you’ve successfully started a new school year. It’s a great feeling.”