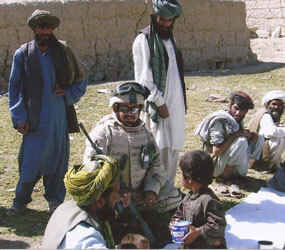 HARLINGEN, Texas – When Deacon Catarino Villanueva arrived on Forward Operating Base Ghazni, Afghanistan, in 2005 for a yearlong deployment with the National Guard, he immediately looked for opportunities to practice his Catholic faith.

“I wanted to see what they had there as far as my spirituality,” said Deacon Villanueva, who was ordained to the permanent diaconate in December 2010 and assigned to Our Lady of the Assumption Church in Harlingen. “There was nothing there, just a bare tent with some makeshift benches.”

Deacon Villanueva, who was discerning a call to the diaconate at the time, became fast friends with a Catholic chaplain assistant, Deacon Paul Rodriguez of the Diocese of Austin.

“There was a lot of work to do on the chapel and I had been praying to God that someone would help me,” Deacon Rodriguez said.

“(Deacon) Villanueva walked into the chapel and introduced himself. He told me he was considering being a deacon.”

Both men were inspired and determined to revamp the chapel. They also began praying the Liturgy of the Hours together every day.

“We wanted something better for our troops,” said Deacon Villanueva, who was with Charlie Company 3/144 Infantry. “Deacon Paul was starting to remodel that chapel and so I started helping him out whenever I could. I would get up in the morning and we’d go out and do a mission.

“As soon as we’d come back, we’d take care of our vehicles and our weapons and clean everything up, then I would run out to the chapel and help him paint, cut boards and put up the walls and the ceiling,” he said in an interview with The Valley Catholic, newspaper of the Brownsville Diocese.

Deacon Rodriguez said soldiers rarely used the chapel because it was so hot and leaked when it rained. He and Deacon Villanueva used sheets of Styrofoam that were leftover from the food shipments as insulation between the wood in the new chapel.

The men had a tabernacle and a rug made by the local villagers and ordered a red perpetual light and Stations of the Cross to complete the chapel.

The chapel was dedicated on Easter 2006, which also happened to be Deacon Rodriguez’s birthday. A priest flew in to celebrate Mass that day for the troops.

“It was the greatest birthday present,” said Deacon Rodriguez, who recently returned to the U.S. after a deployment to Iraq. He serves at St. Margaret Mary Church in Cedar Park.

With the new tabernacle, Deacon Rodriguez was able to store consecrated host and have more Communion services between visits from traveling priests, who flew in every now and then to celebrate Mass.

“It was important for me and Deacon Paul to have Eucharist for the soldiers, to offer these Communion services,” said Deacon Villanueva, a married father of four and grandfather of six. During his tour, he went from discernment to decision and completed a formal application to the diaconate formation program.

“I wanted to continue to serve my country,” he said. “I felt that it was something that I needed to do.”

Deacon Villanueva’s time in Afghanistan made him more grateful than ever for his faith and for his country, for the religious freedom that we have and the opportunity to attend Mass regularly, daily, if desired.

He said some Afghans were hired to do maintenance work on the base. Although Deacon Villanueva and other Christians on base never proselytized, some of the workers were interested in the Catholic faith and quietly inquired about it. Islam is the official state religion of Afghanistan and there is not a single, public Christian church left in Afghanistan, according to the U.S. State Department.

“We taught some of them how to pray the rosary, which they had to do in secret,” Deacon Villanueva said. “The Afghan people face grave consequences if they are caught practicing Christian activities.”

Deacon Rodriguez planned to take the tabernacle with him when he left Afghanistan since many of the military chaplains are not Catholic. The next group of soldiers that came in, however, happened to have a Catholic priest among them, which is rare, Deacon Rodriguez noted.

After that group left, an Orthodox priest was assigned to the area and he wanted to continue using the tabernacle. Then a group of Polish soldiers came in and also used the tabernacle.

“So many Catholics following us there, it’s not a coincidence,” Deacon Rodriguez said. “If you build it, they will come.”