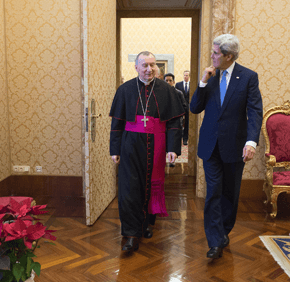 By Catholic News Service
VATICAN CITY – Here is some brief biographical information about each of the 19 churchmen Pope Francis will induct into the College of Cardinals Feb. 22:
— Italian Cardinal-designate Pietro Parolin, Vatican secretary of state, was serving as Vatican nuncio in Venezuela when Pope Francis named him to the top job at the Vatican. The 59-year-old had already held important posts in the Vatican diplomatic service, including leading annual visits to Vietnam for talks with the country’s communist rulers about greater religious freedom and the appointment of bishops.
— Italian Cardinal-designate Lorenzo Baldisseri, the 73-year-old general secretary of the Synod of Bishops, already has a red hat from the pope. In fact, following an old custom, right after Pope Francis was elected, he gave his red cardinal’s zucchetto to Archbishop Baldisseri, who was secretary of the College of Cardinals at the time. The cardinal-designate is a veteran of the Vatican diplomatic corps and is the man Pope Francis hand-picked to organize the Synod of Bishops with a renewed structure.
— German Cardinal-designate Gerhard Muller, prefect of the Congregation for the Doctrine of the Faith, is a longtime friend of retired Pope Benedict XVI, but also has a firsthand, and very sympathetic knowledge of the work of the church in Latin America. The 66-year-old archbishop regularly spent his vacations doing pastoral work in poor areas of the continent and is co-author of the book, “On the Side of the Poor: The Theology of Liberation,” written with Dominican Father Gustavo Gutierrez, considered “the father or liberation theology.”

German Archbishop Gerhard Muller, prefect of the Congregation for the Doctrine of the Faith. (CNS photo/Paul Haring)
— Italian Cardinal-designate Beniamino Stella, 72, prefect of the Congregation for Clergy, isn’t just a veteran of the Vatican diplomatic corps, he’s the former president of the Ecclesiastical Academy, where Vatican diplomats are trained. He was nuncio to Cuba and helped prepare the historic visit of Pope John Paul II in 1998. Pope Francis appointed him head of the clergy congregation in September.
— Like Pope Francis, English Cardinal-designate Vincent Nichols of Westminster is a serious soccer fan; the 68-year-old head of a diocese covering London north of the River Thames is still devoted to his hometown Liverpool Football Club. A former archbishop of Birmingham, he has been a leader in the efforts of the bishops of England and Wales to implement child protection programs and address the clerical sexual abuse scandal.
— Nicaraguan Cardinal-designate Leopoldo Brenes Solorzano of Managua, 64, said he believes Pope Francis named him a cardinal because of 40 years of ministry close to the people, and especially to the poor. A native of Managua, he’s had a red cardinals’ cassock for several years; his predecessor, Cardinal Miguel Obando Bravo, gave it to him saying, “Take this in case they someday make you cardinal.”
— Canadian Cardinal-designate Gerald Lacroix of Quebec, 56, is a popular retreat leader and preacher, who had 10 years of missionary experience in Colombia. Primate of Canada since 2011, much of his pastoral work now involves strengthening Catholics and convincing others to work against the breakdown of the family, an increase in individualism and a lack of respect for life from the moment of conception to natural death.

Archbishop Gerald Lacroix of Quebec. (CNS photo/Paul Haring)
— Ivorian Cardinal-designate Jean-Pierre Kutwa of Abidjan, Ivory Coast, 68, is a noted musical composer, who is trying to bring harmony to his country after a decade of conflict and instability. When his nomination as a cardinal was announced, he told a local newspaper that if being a cardinal gave him more clout, he’d use it to combat “the verbal violence of politicians. … It isn’t just the truth which matters, but the form in which it’s proposed. If the truth isn’t pronounced with good form, the person you speak it to will feel aggression and refuse what’s offered.”
— Brazilian Cardinal-designate Orani Tempesta of Rio de Janeiro, 63, was addressed as “cardinal” by Pope Francis last July, at least according to Brazilian media, which reported the pope called him that when leaving Rio after World Youth Day. The cardinal-designate is a former Cistercian abbot, who has been a bishop since 1997 and archbishop of Rio since 2009.
— Italian Cardinal-designate Gualtiero Bassetti of Perguia-Citta della Pieve, 71, claimed he had no advance notice that Pope Francis would name him a cardinal Jan. 19, and he didn’t believe the woman who ran into the sacristy after a confirmation Mass to tell him the news. When he looked on the Vatican website and saw it was true, “I almost fainted,” he said. As president of the regional bishops’ conference of Umbria, he was one of the hosts of Pope Francis’ visit to Assisi in October.
— Argentine Cardinal-designate Mario Poli of Buenos Aires, 66, was one of the first bishops appointed by Pope Francis and is his direct successor in Buenos Aires, the city where both of them were born. Cardinal-designate Poli had been an auxiliary bishop of Buenos Aires while the pope was archbishop there and is seen as having a very similar pastoral style, taking public transportation and spending time with the poor.
— Korean Cardinal-designate Andrew Yeom Soo-jung of Seoul, 70, is archbishop of Seoul, but he also is apostolic administrator of the North Korean Diocese of Pyongyang, a diocese that exists only in name since the country is officially atheist. He also is a direct descendant of one of Korea’s first Catholics and of a Korean Catholic martyred for the faith in 1850.

Korean Archbishop Andrew Yeom Soo-jung of Seoul. (CNS photo/courtesy of Seoul Archdiocese)
— Chilean Cardinal-designate Ricardo Ezzati Andrello of Santiago, 72, says he is “the son of a simple family, a small business owner in a rural village,” and he says his simple childhood has helped him in his ministry. A spokesman for the Chilean bishops’ conference said the cardinal-designate has dedicated his career to working alongside the people, much the way Pope Francis did when he was a bishop in neighboring Argentina.
— Burkina Faso Cardinal-designate Philippe Ouedraogo of Ouagadougou, 69, describes himself as “a little bishop of the savannah,” but the little bishop has been increasingly outspoken about problems in his country. In his Christmas homily, he deplored Burkina Faso’s domination by “a handful of citizens who hold the great part of its wealth” in a society “characterized by disparities, inequality, injustice, poverty and misery.”
— Philippine Cardinal-designate Orlando Quevedo of Cotabato, 74, works in the heart of the country’s Muslim region, and Muslims as well as Catholics praised him and his work. Father Louis Lougen, superior general of the Oblates of Mary Immaculate, the religious order to which Cardinal-designate Quevedo belongs, said his appointment was a “recognition of a very committed missionary, a priest and bishop who leads by serving others, whose main concern is the Gospel and the poor and who has worked tirelessly to promote friendship between Christians and Muslims, to support their struggle to live together in respect and peace.”
— People who know Haitian Cardinal-designate Chibly Langlois of Les Cayes, 55, say he worked tirelessly after the January 2010 earthquake and that he represents the face of new Haitian church dedicated to working with the country’s most vulnerable residents. “He has dedicated himself to creating opportunities for the youth and to the importance of education,” said Father Jean Herve Francois, pastor at the Our Lady of Lourdes Parish in Laborde, just north of Les Cayes. “He clearly has a touch with ordinary people.”

Bishop Chibly Langlois of Les Cayes, Haiti. At age 55 he is the youngest and also the only non-archbishop in the group. (CNS photo/Nancy Phelan Wiechec)
— At age 98, Italian Cardinal-designate Loris Capovilla, former secretary to Blessed John XXIII, will become the world’s oldest cardinal. A journalist before starting to work for Blessed John, he remains an energetic and eloquent raconteur, drawing on his remarkable memory for vividly detailed and revealing stories of his years with one of the most consequential figures in modern Catholic history. He has also recounted those stories in numerous writings, including a memoir published in English as “The Heart and Mind of John XXIII.”
— Spanish Cardinal-designate Fernando Sebastian Aguilar, retired archbishop of Pamplona, 84, is an outspoken leader who played an important role in developing the positions of the Spanish church over a career that has spanned six decades. His career has been marked by a deep dedication to theology that includes the publication of several letters and books on topics as diverse as stem-cell research to the importance of evangelization to how Christianity can confront terrorism.
— Antilles Cardinal-designate Kelvin Felix led the Archdiocese of Castries, St. Lucia, for nearly 30 years and was away from his home country of Dominica so long that people believed he was St. Lucian. Since retiring in 2008, the cardinal-designate, now 81, has been trying to “re-establish” himself in full-time priestly ministry by working in a small parish in Soufriere, Dominica.