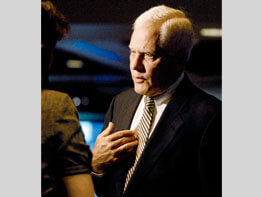 NEW ORLEANS – There are bad days – and then there are incredibly bad days. Cobble enough of those together, as Marine Maj. Gen. Douglas O’Dell did in August 2005, and the sobering result was “the worst month of my life,” a snapshot of death and despair that won’t ever depart from a steely-eyed military man whose emotional survival is based on compartmentalization and detachment.

In early August 2005, the 4th Marine Division under O’Dell’s command in western Iraq lost 22 Marines, including 15 on a single day in a huge roadside explosion. O’Dell spent the early part of August consoling grieving families in the U.S. before returning to Iraq to stand with the Marines engaged in heavy fighting in Anbar province.

Toward the end of August, O’Dell, a self-proclaimed Irish Catholic, flew back to the U.S. for what he thought would be a few days of badly needed decompression. He flew to Maine on the Thursday before Hurricane Katrina, thinking about nothing other than steamed lobster. When O’Dell picked up the phone on Saturday morning, he got the word: “You’d better be prepared to bring (troops and supplies) back to New Orleans and the Gulf Coast.”

By Sunday night, O’Dell said, the Marines were ready to report to Louisiana by the time Katrina made landfall. That led to his two and a half years of heroic post-Katrina duty.

“It was then that I decided that one way I could honor their service was to draw on their life energy, that I still carried with me, in confronting the horrors and the evils of Katrina,” O’Dell said.

When O’Dell retired in April 2008, he eagerly anticipated spending time with his grandchildren and finally putting Katrina in his rearview mirror. That was until President George W. Bush called and asked if he would succeed Donald Powell as the coordinator of federal support for the recovery and rebuilding of the Gulf Coast.

For the last four months, O’Dell has been the point person trying to turn federal money and disparate visions into reality. The lesson he’s taken from his Sisyphean task is that the region, three years after Katrina, would not be close to its level of recovery without the volunteer efforts coordinated by faith-based groups, especially by Catholic Charities.

O’Dell mentioned the thousands of quiet heroes – the Baptist church in Mississippi that is still serving free lunch to workers every day; the volunteers for Catholic Charities’ Operation Helping Hands who have gutted and repaired houses; the relentless efforts of Providence Community Housing, a Catholic housing initiative, to provide not just places to live but beautiful, affordable homes that give low-income families the chance to return to New Orleans and the sense that they matter.

As of June 30, 2008, the archdiocese has recovered $183.3 million through insurance, gifts, grants and the Federal Emergency Management Agency, Archbishop Hughes said when issuing a post-Katrina financial report in July.

Along with the financial loss, the archdiocese also saw its Catholic population drop by more than 100,000 since Katrina hit, he said.

While O’Dell has candidly assessed the vacuous performance of some city leaders, he has heaped praise on Jim Kelly, the co-president and CEO of Catholic Charities, and his colleagues, for their effective leadership. Because of Catholic Charities’ proven track record, O’Dell is willing to move heaven and earth to “lubricate the process” and get more federal dollars into the hands of faith-based nonprofits.

“Jim Kelly is one of the fellows who experienced the storm viscerally, passionately, in his soul,” O’Dell said.

Kelly, for his turn, has praised O’Dell for walking through neighborhoods and cutting through red tape.