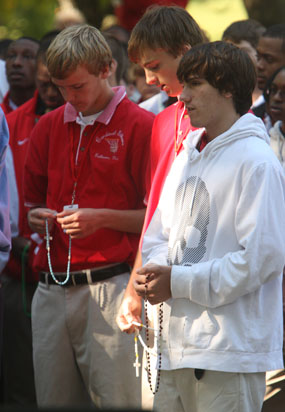 Three high schools in the Archdiocese of Baltimore received their re-accreditation from the Middle States Association of Colleges and Schools’ Commission on Secondary Schools in 2009.

The Cardinal Gibbons School, The John Carroll School and Our Lady of Mount Carmel High School all received notice this year, after thorough internal and external analysis.

The schools received commendation for dedication to their missions.

According to the Middle States’ Web site, it “is the leader in ensuring that all students in its region receive the highest quality of education and achieve at levels expected by society. Through its accreditation and school improvement services, MSCSS recognizes excellence in educational quality, planning and growth in student performance and provides the means to meet rigorous standards of educational quality.”

David Brown, Cardinal Gibbons’ principal and acting president of the Baltimore school, said preparing for the evaluation took a year. Parents, teachers and students were among those who did their own evaluations before the teams arrived.

Brown has been part of many visiting Middle States committees, so he was familiar with the process. He said accreditation is important.

“It’s good for parents to understand that we have a mission, a philosophy and an outstanding curriculum,” Brown said. “You know you’re getting a great deal for your young man.”

He added that the Bel Air school’s analysis was collected into about 40 to 50 written pages.

One of the major aspects of the middle states evaluation is there are also a series of recommendations to improve or update. Brown said that Gibbons is currently organizing efforts for a capital campaign for various upgrades.