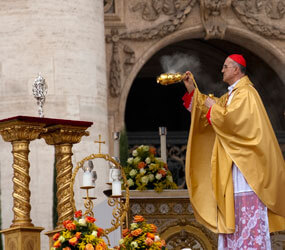 VATICAN CITY – In the same square where Pope John Paul II was shot by a would-be assassin almost 30 years ago, thousands of people returned to thank God for the gift of his life and for his beatification.

“We can never forget that 30 years ago, in this very square, he gave his blood for the cause of Christ,” his longtime personal secretary, Polish Cardinal Stanislaw Dziwisz of Krakow, told an estimated 60,000 people gathered May 2 for the thanksgiving Mass.

A Turkish gunman, Mehmet Ali Agca, shot Pope John Paul May 13, 1981, while the pope was riding through the square during his weekly general audience.

A silver reliquary containing a vial of Blessed John Paul’s blood was carried into St. Peter’s Square at the beginning of the procession of 30 cardinals and 150 bishops who concelebrated the Mass.

Pope Benedict proclaimed his predecessor blessed May 1 during a Mass that brought 1 million people to the Vatican and to video screens set up around Rome.

Cardinal Tarcisio Bertone, Vatican secretary of state, presided over the thanksgiving Mass. He thanked “the Lord for having given us a pastor like him” and for “having given us a witness like him.”

He also thanked God for “having given us a pope able to give the Catholic Church not only a universal reach and a moral authority on a global level like never before,” but also one who helped Catholics be “more spiritual, more biblical and more centered on the word of God.”

“Finally, we thank the Lord for having given us a saint like him,” Cardinal Bertone said.