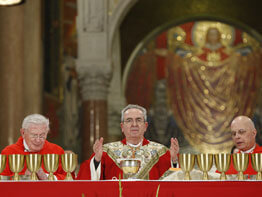 WASHINGTON – With thousands of pro-life marchers packed into the Basilica of the National Shrine of the Immaculate Conception in Washington Jan. 21 for a special Mass that launched an all-night vigil, Rita Richardson of Fredericksburg, Va., couldn’t see the altar.

The 32-year-old parishioner of St. Matthew Church in Spotsylvania, Va., stood quietly by a row of candles facing the back of the basilica, closed her eyes and listened as the sounds of the organ reverberated throughout the enormous basilica.

Though she had attended the March for Life rally in Washington each Jan. 22 for many years to commemorate the anniversary of the U.S. Supreme Court’s 1973 Roe v. Wade decision legalizing abortion, it was the first time she had joined the all-night vigil at the basilica, beginning with a 7 p.m. Mass the evening before the main event.

Ms. Richardson wasn’t anguished over her lack of a view of the altar or the large television monitors that allowed some spectators to see the principal celebrant, Cardinal Justin Rigali of Philadelphia, chairman of the U.S. bishops’ Committee on Pro-Life Activities.

“I’m here with thousands of others who believe we must work to end abortion,” she said. “I’m happy we have this kind of crowd, because this is where we need to gather to be nourished by Our Lord, so we have the strength we’ll need to go out to the march and take action.”

Catholics from all over the country traveled to the nation’s capital for the 36th anniversary of the Roe v. Wade decision, with blacks, whites, Hispanics, Asians, elderly, middle-age and young Americans represented in the crowd at the opening Mass.

“I’m so glad there are so many young people here tonight,” said William Spencer, 39, of Dubuque, Iowa, who brought his son, Alex, an eighth-grade student at Wahlert Catholic High School in Dubuque, to the Mass. “It tells me there is a future for the pro-life movement.”

Cardinal Rigali applauded the sacrifices of those who attended the vigil and March for Life 2009 and said he believed God was calling on his Catholic “pro-life disciples” to gather prayerfully in his name so they could better understand his will in what may be challenging times ahead.

Though he expressed joy that newly inaugurated President Barack Obama had broken the racial barrier to become the first black American to hold that high office, he said Catholics must voice their opposition to abortion and convince the new U.S. leader to help protect the most vulnerable, the child in the womb.

“Thank you for your commitment to live out your faith,” Cardinal Rigali said, “and to exercise your duties as Catholic citizens by standing up for those who cannot speak for themselves.”

The people in the pews and those sitting and standing in the aisles and side chapels fell silent as the cardinal’s words and the aroma of burning incense filled the largest basilica in the U.S.

“It’s touching that people are so dedicated to the cause,” said Marianna Wright, 15, a sophomore at Seton Catholic Central High School in Binghamton, N.Y. “This place is beautiful and it has a way of bringing people together for the common purpose of supporting life.”