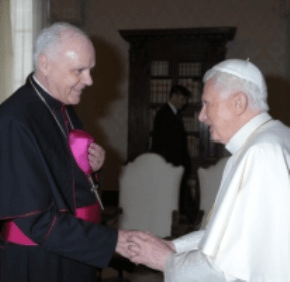 As I go to Rome for next week’s consistory, at which I will be elevated to the College of Cardinals, I do so with thoughts of the faith and ethical traditions that have long marked the Church in Baltimore, and the ethical standards that have been the hallmarks of the Maryland “experiment.”

I look forward to the joy of the ceremonies at St. Peter’s as I wear the pectoral cross worn by Archbishop John Carroll. I anticipate that the day will be mingled with thoughts of four happy years in Baltimore. I also expect to be mindful that day of the extremely troubling challenges to our most basic values confronting our Church and her people.

For a second straight year, our Church will celebrate World Marriage Day just as many leaders in Annapolis – some Catholic, sad to say – are determined to redefine the sacred institution of marriage. From time immemorial, marriage has been singled out for special recognition by societies throughout western civilization based solely on one unique fact: it is the only relationship capable of bearing children and thus contributing to the good of the family and thus the overall good of society.

After all, the family is the most basic unit of society. The family – by nature – can only begin through the union of one man and one woman. We cannot allow our state law to defy this simple truth. We recognize that families come in all shapes and sizes and that all families deserve support and protection. But we also know that every child brought into this world deserves to know that he belongs to both a mother and a father. If our elected officials redefine marriage, it removes from the law the recognition of this unique bond between children and their natural parents.

The Maryland Court of Appeals supports this obvious benefit, commenting in its 2007 ruling upholding the state’s marriage statute: “In light of the fundamental nature of procreation, and the importance placed on it by the Supreme Court, safeguarding an environment most conducive to the stable propagation and continuance of the human race is a legitimate government interest.”

Those seeking to overturn the state’s definition of marriage claim that same-sex couples are unjustly denied the same rights and benefits available to married couples. Yet Maryland’s Legislature has already chosen to provide many of these benefits (including health care visitation, medical decision-making and exemptions from recordation, transfer and inheritance taxes) through domestic partnership laws.

As was the case last year, those who do not share our views on this issue have tried appealing to popular sentiment by labeling it a civil rights issue and all who oppose it, as bigots. I reject being branded a bigot simply because I believe marriage should continue to be reserved – as it has for millennia – for the God-ordained union of a man and woman.

Colin Powell also rejected the idea of treating the issue of sexual orientation as a civil rights issue. In 1992, General Powell told the Armed Services Committee: “Skin color is a benign, non-behavioral characteristic. Sexual orientation is perhaps the most profound of human characteristics. Comparison of the two is a convenient but invalid argument.”

Sadly, even the United States government has embraced this “convenient but invalid argument.” When the Obama Administration announced a year ago that it would no longer defend the Defense of Marriage Act, which upholds traditional marriage at the federal level, the Justice Department equated those in favor of DOMA to racists.

Cardinal-designate Timothy Dolan, President of the U.S. Conference of Catholic Bishops, wrote to President Barack Obama to protest against the decision and the shameful tactics.

“It is especially wrong and unfair to equate opposition to redefining marriage with either intentional or willfully ignorant racial discrimination, as your Administration insists on doing,” he wrote. “While all persons merit our full respect, no other relationships provide for the common good what marriage between husband and wife provides. The law should reflect this reality.”

Marriage between one man and one woman, with a view toward family, is a basic human and social institution … indeed, the most basic of such institutions. True, to protect the institution of marriage civil law and Church law will always set regulations around it. But marriage precedes all human law, originating in and guided by the natural law of God. Therefore, neither the Church nor the state can alter its basic meaning and structure. “God created man in the image of himself, in the image of God he created him, male and female he created them. God blessed them, saying to them, ‘Be fruitful, multiply, fill the earth and subdue it.’ (Gen. 1: 27-28).”