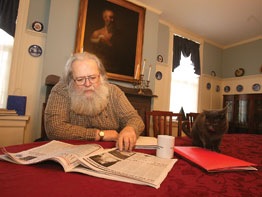 With winter finally making an appearance, soaring ceilings combined with equally high heating bills find some parishioners reaching for their coats while pastors reach for a programmable thermostat.

The challenge is to heat the church in time for Mass but conserve energy throughout the week.

Father Chris Moore, pastor of St. Joseph, Hagerstown, sets the thermostat at 68 degrees for Mass. He’s lucky; he has both an automatic system and a daily Mass chapel. The church is cleaned Saturday morning, and the system heats the church from its usual 60 degrees to 65, and by afternoon confessions and Saturday evening Mass it’s 68. The chapel, open all day, stays at 68.

“Like a car, we tune them up every heating season,” he said via e-mail. “The money spent on this tune-up comes back in savings on the amount of gas used. We check all the radiators and places where the steam might be leaking; even a small steam leak causes the boiler to be less efficient. One of the greatest money-savers was getting programmable thermostats for all the buildings – they are no-brainers when it comes to energy efficiency.”

The 1,000-seat church is kept at 55 degrees, but the boiler is programmed to kick on at noon Saturday so that by 4 p.m. the church is 68 degrees.

Our Lady of the Chesapeake, Lake Shore, relies on 10 propane-fired units, set on a timer, which need just one hour to warm the church.

“If there is a special function during the week or Holy days when there is Mass and the units are usually not running, there is an override switch which we turn on,” Macey Glinka, facilities manager for the church, said via e-mail. The church also uses ceiling fans so that when heat rises, fans push that “wasted” heat back down.

At St. Ursula, Parkville, they’re just thankful to have a boiler. The church’s old boiler failed this fall, leaving parishioners in the cold. Replacing it took a month.

“It was so cold for that Saturday night wedding,” said Monsignor James P. Farmer, pastor, referring to a Nov. 10 wedding, one of two on that chilly weekend.

Avoiding just that situation was the goal of an archdiocesan pilot program in city churches last winter.

The voluntary program offered parishes a guarantee: If they enrolled in the insurance-type program, which had prescribed maintenance, and their boiler failed, they would only pay a $250 deductible. Those who didn’t enroll would face half the $10,000 to $20,000 cost of replacing a boiler.

“We went from seven failures in 2005 to just one in 2006,” said Nolan McCoy, director of facilities and real estate for the archdiocese. The program was such a success that this year it’s being conducted throughout the archdiocese.

Mr. McCoy said that the archdiocese offers parishes a cooperative program for procuring electricity and natural gas, and they hope to expand it to heating oil soon. Parishes in the co-op save about 5 percent and can count on those prices through 2010.

Whether the boiler is gas-fired or oil-fueled, it’s the thermostat that has to please.

Mr. McCoy notes that if the temperature falls below 50 degrees, surfaces such as plaster deteriorate rapidly. But he leaves it up to each parish to figure out just how high to go for Mass.

“How do you please everybody?” said Father Syracuse. “Let’s face it, Jesus couldn’t do that and he was God’s son. Seriously, keeping the temperature at 68 works well … most people have their coats with them and rare are the times that we get complaints.”