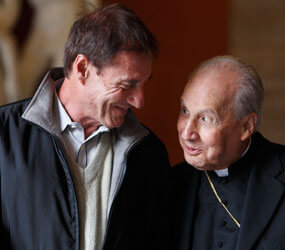 WASHINGTON – Roland Joffe, director of “There Be Dragons,” the new movie that dramatizes the early life of St. Josemaria Escriva, founder of Opus Dei, says he takes full responsibility for the finished product.

“The responsibility of what’s in this movie is mine entirely. Whatever people think about it, they are going to have to lay it on my door. They certainly can’t lay it on Opus Dei’s door,” Joffe said. “I really shouldn’t worry about my interpretation with my own spirituality. If there was truth in what he (St. Josemaria) was saying, that truth would shine through any kind of lens I could put on it. What I did was bring a very ordinary human being’s view of what that truth might be.”

Joffe added he had doubts about making the film, but not because of its connection with Opus Dei, which has been a target of criticism over the decades – most notably through the book and movie “The Da Vinci Code.”

“I had grave doubts whether I was up for this film in terms of my knowledge of religion,” he said. “Religion is an immensely rich and extraordinary experience, and I thought about how I could bring something new to that experience.”

Joffe added, “There will certainly be an anti-Opus Dei bias because (St.) Josemaria founded Opus Dei. The movie is not intricately about Opus Dei, it is about something that was born out of Josemaria’s thinking and something that he created and loved very much.

“I began to delve into it, and after reading and hearing what people were saying about it, I began to realize there’s a wall of opinions about Opus Dei. And of course that is true about so many things. In some senses it’s natural enough for you to not read everything and exploit everything. But we can’t know about everything, and I think there’s no doubt that public opinion is often formed by rumor, by association. So I think we will battle some opinions about what Opus Dei is with this film.”

Joffe, who describes himself as an agnostic, made his remarks in an email exchange with Catholic News Service. The director is in India, where he is working on location shooting for a new movie, “Singularity.”

“There Be Dragons” explores the Spanish saint’s life from childhood to the Spanish Civil War. Joffe also directed, in 1986, “The Mission,” which starred Robert de Niro and Jeremy Irons as Spanish Jesuits protecting a Brazilian tribe against Portuguese colonizers.

“The church in my films is represented through individuals. There is no focus on church position itself, only positions of individuals,” Joffe told CNS. “However, I think that I also wanted people to understand that the church in Spain was in a very difficult position then. And different members of the hierarchy and different members of the church responded to these things in different ways, and I think that is quite important.

“Lots of people fail to imagine that religion is about choice. There is a very important difference between coercion and religion. It seems to me that one of the very exquisite aspects of many religions actually is the idea that the human being, the human consciousness, has a right to choose,” he said.

“So for me the films are about what ways choices exercise themselves within historical conundrums. I wanted them to be about living in the world as it is, and seeing how religious ideals and ideologies have to cope with the pain of everyday living and what that begins to ask of people.”

Joffe confessed that when initially took on “There Be Dragons” – he is not only director but also its writer – “I didn’t quite understand how you could make a modern movie about a saint. What resonance would a saint have in modern times?

“In the film, the (fictional) character Manolo is in a sense the twin of Jose Maria,” he added. “At one point I wanted the same actor to play both parts, but in the end I decided that might be a complication.”

John Mulderig of CNS’ Media Review Office called “There Be Dragons” a “striking portrait of an anything-but-plaster saint” and a “healthy antidote to … sensationalized misconceptions” about Opus Dei. Where it fails, Mulderig added, was in using fictional characters to tell St. Josemaria’s story, “a storytelling device that turns out to be more burden than enhancement.”

“There Be Dragons” received a classification of A-III – adults – for its “occasionally bloody action violence, a few sexual references, a couple of crude and a half-dozen crass terms.”