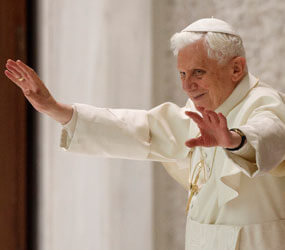 ROME – As the second volume of “Jesus of Nazareth” was about to be published, a Swiss cardinal said it’s important that people realize the book was written by the theologian Joseph Ratzinger and not by Pope Benedict XVI.

“This distinction is not a matter of splitting hairs,” said Cardinal Georges Cottier, the former theologian of the papal household.

Cardinal Cottier said even if it may be confusing in the case of Pope Benedict, who was famous as a theologian before being elected pope, it is important for people to understand that theology is a human exercise, which is open to debate and criticism; but because of the Holy Spirit’s gift to the church and to the individual elected, the teaching of a pope requires a greater degree of assent.

The Swiss cardinal spoke Feb. 18 at an evening conference organized by the Vatican publishing house; earlier in the day, the Vatican announced that the second volume of “Jesus of Nazareth” would be released March 10 at the Vatican. The first volume was published in 2007.

Cardinal Cottier told a packed house at a bookstore in the center of Rome that the confusion between the work of the theologian Ratzinger and Pope Benedict was not helped by publishers of the first volume, who wrote “Pope Benedict XVI” on the cover in much larger letters than they wrote “Joseph Ratzinger.”

Writing the pope’s name like that, he said, makes it appear “as if this were a text of the magisterium,” the teaching authority of the church. In the foreword, “the pope himself makes a distinction that commercial interests don’t make. This distinction is not a matter of splitting hairs, it’s fundamental because theology is a discipline that presupposes faith … but uses human means,” he said.

A theologian, “like any human being, can make a mistake or propose his own opinions,” Cardinal Cottier said, even if the theologian is Joseph Ratzinger, “one of the greatest theologians of our age,” he said.

The role of the pope is to tell Catholics “what is conforming to the faith and what is not. Obviously, to make this kind of discernment, human qualities are needed, but on the more crucial, more central points, there is the assistance of the Holy Spirit,” working not only personally with the pope, but also with the College of Bishops called to advise and assist him, Cardinal Cottier said.

The cardinal said Catholics must “not consecrate the work of Joseph Ratzinger as if it were an act of the magisterium.”

At the same time, he said, people cannot pretend that the encyclicals and other formal pronouncements he makes as pope “were simply the thought of the theologian Ratzinger,” which could be disputed or ignored.

Asked what he sees as the priorities in the theology of Joseph Ratzinger, the cardinal said, “liturgy is the central point of his theology.”

“He chose fundamental theology as his specialty because he wanted to go to the depths of the question, ‘Why do we follow God?’ And then, ‘How should we follow God?’ which leads to liturgy,” the cardinal said.

What the theologian Ratzinger has written about liturgy “has turned into a controversy over the orientation of the altar” – which way the priest should face during Mass – “when his central concern was that people see liturgy as the central act of our faith,” he said.

Cardinal Cottier said the second topic would be the relationship between faith and reason, and the third would be liberty or freedom.

The church’s insistence that religious liberty is the most important of human freedoms “can seem a bit presumptuous,” but the ability to choose what to believe or not believe, the ability to have a direct relationship with God, “is what makes a human being a person,” the cardinal said.