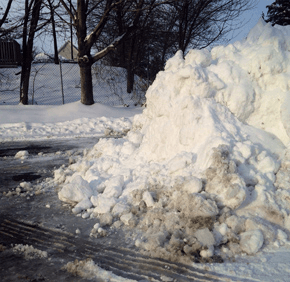 By Maria Wiering
mwiering@CatholicReview.com
More than 1,100 students, teachers and advocates for Maryland non-public schools were expected to lobby the Maryland Legislature March 4, but the Maryland Catholic Conference canceled the event after ice and snow blanketed the region March 3.
Many of the participating schools canceled or postponed opening March 4.
The event, “Give Kids the Credit,” was to give supporters of Catholic and other non-public schools an opportunity to push for the passage of the Maryland Education Credit (SB 633/HB 1262) and other legislation benefitting nonpublic schools.
Although students won’t be at the State House this year, they’re still getting lawmakers’ attention, said Garrett J. O’Day, MCC associate director for education and family life.
“We’ve made all legislators aware that we had that big of a response, and there is a rejuvenated effort for advocacy amongst nonpublic schools,” O’Day said. “We saw everybody getting involved – we had responses from Islamic schools, Montessori schools, independent private schools, Protestant Christian schools.”
The Maryland Tax Credit would provide financial assistance to public and nonpublic schools through the creation of a new business tax credit of up to $200,000, equal to 60 percent of a business’ donation to nonprofit institutions that provide financial assistance. The funding could cover expenses including tuition, tutoring, transportation and supplies. Low and middle-income families would be given priority.
O’Day recommends nonpublic school advocates petition members of the House of Delegates on the tax credit. The House Ways and Means Committee will hear the bill March 7.
According to the MCC, Maryland gives far less annually to nonpublic schools than some neighboring and nearby states. New York provides $805 million; New Jersey, $164 million; and Pennsylvania, $340 million.
Last year Maryland allocated $9.5 million to nonpublic school services.
The Maryland State Education Association opposes the tax credit, calling it “a backdoor approach to providing vouchers to parents of children in private schools by subsidizing tuition at private schools with public tax dollars.”
The American Civil Liberties Union of Maryland also opposes the bill.
Textbook, aging schools funding
At the rally, non-public school advocates also planned to voice support for funding in the state budget for the Nonpublic School Textbook and Technology Program and the Nonpublic Aging Schools program.
The textbook and technology program provides funding for nonreligious textbooks and technology to students attending nonpublic schools whose tuition does not exceed the current state average per-pupil cost of $14,364.
The aging schools program funds security upgrades and school renovation projects for schools who meet similar eligibility guidelines as the textbook program.
Last year, the Legislature approved $6.04 million for textbook funding and $3.5 million for nonpublic aging schools. In his budget, Gov. Martin J. O’Malley proposed to fund both programs at the same levels this year.
According to the Maryland Catholic Conference, nonpublic schools save Maryland taxpayers $1.45 billion annually.
“We have confidence that our Legislature will continue to support the textbook program, and we hope they will continue the nonpublic aging schools program which provided much-needed relief to many schools that had deferred maintenance,” O’Day said.
Of the schools that planned to participate in the rally, 17 were Catholic schools from the Archdiocese of Baltimore.
St. Casimir Catholic School in Canton planned to send members of its student council to the rally. With 210 students, the pre-K-to-grade-eight school is small and can’t afford resources larger schools can, said Principal Noreen Heffner. The school has received funding from both the textbook/technology program and aging schools program.
“They are a great resource,” Heffner said of the students. “When we say it, sometimes they (lawmakers) don’t listen. When it comes from the children, and they know what they’re talking about, it kind of made a difference.”
Taking to social media
The nonpublic school rally will not be rescheduled. The MCC is asking Catholic school faculty, staff and students to send letters or postcards to their office for delivery to lawmakers representing their schools’ legislative districts.
The MCC plans to host a 1 to 2 p.m. Twitter chat March 6, using the hashtags #MDGA14 and #GiveKidsTheCredit. It is also asking schools to post videos to YouTube or Facebook in support of the legislation that the rally would have featured.
Maryland has 152 Catholic schools in the Archdiocese of Baltimore, the Archdiocese of Washington and the Diocese of Wilmington. The Archdiocese of Baltimore has 68 archdiocesan, parish and private Catholic schools.
See also:
Scout Mass brings ‘peace light’ to Baltimore archdiocese
PrevNext