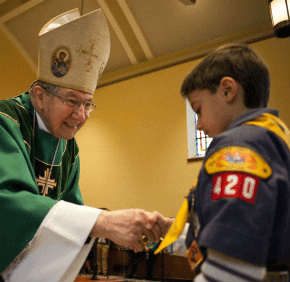 By Jessica Marsala
jmarsala@CatholicReview.org
UPDATED 10:50 a.m. March 4, 2014 RODGERS FORGE – For 83 years, youths and adult leaders from parishes across the Archdiocese of Baltimore have received their Catholic Scouting emblems at the annual Scout Mass.
At this year’s Scout Mass, held March 2 at St. Pius X in Rodgers Forge, the Boy Scouts of America, Girl Scouts, American Heritage Girls and participants from other programs gathered for another purpose, to exhibit at the Scout Mass for the first time the International Peace Light.
Its flame originates in the grotto in Bethlehem, where Jesus was born. According to the World Organization of the Scout Movement, the Peace Light was the brainchild of the Austrian Broadcasting Company, which in in 1986 used the light as part of a charitable relief mission.
The flame has illuminated other vessels and traveled to houses of worship, hospitals and prisons, among other places, throughout Europe, North America and Russia, and was brought to Ground Zero after 9/11, according to the Scout Mass program.
While Scouts have been bringing the flame to the United States and sharing it for many years, last year was the first it came to the archdiocese, by way of St. John the Evangelist in Frederick.
“I think it’s a great way for us as Catholics in a visible way to connect with our faith and with the greater Christian community,” said Amy Spessard, the director of evangelization at the Frederick parish and chairman of the Peace Light program for the archdiocesan Catholic Committee on Scouting.
Concelebrant Monsignor Thomas Phillips, pastor of St. Gabriel in Windsor Mill and chaplain of the Catholic Committee on Scouting, compared the Peace Light to the Olympic Torch as well as the “new fire” that lights the paschal candle.
“The Olympic torch is lit and carried through many countries,” Monsignor Phillips said. “In the same way, (there is) the unity we have with each other and the desire that we all have for peace.”
“I think that the way they (the Scouts) lead their lives: that’s really how they keep the light burning, keep the light alive,” Bishop Denis J. Madden said after celebrating the Mass. “Christ, the light of the world, was born in Bethlehem, and this symbolism reminds us in a wonderful way that Christ is always with us.”
Cathy O’Haver, who worships at St. Pius X and has a 9-year-old son, Jacob, in its Cub Scout Pack 787, sees potential in the Peace Light program.
“It makes you feel (like) part of a larger community,” O’Haver said. “It makes it very special.”
The flame will travel with the Scouts to the annual Interfaith Scouting Retreat, May 2-4 at the Broad Creek Memorial Scout Reservation in Harford County.
Youths from more than 70 parishes in the archdiocese were recognized at the Scout Mass.
Honorees at the Mass included three Pillar of Faith recipients, who had earned all five religious emblems: Joseph Camello and Timothy Yantz of St. Margaret, Bel Air; and Jackson Pugliese of St. Paul, Ellicott City.
Also recognized were five adult leaders: Kate Kleintank of Church of the Resurrection in Ellicott City; Michael Parrish of St. John the Evangelist, Hydes; Andrew Giacco of St. John the Evangelist in Frederick; Antoinette McKinney of St. Joseph, Cockeysville; and Carrie Joneckis of St. John the Evangelist, Severna Park.
In addition, five Scout units received the Pope Paul VI Quality Unit Award: Cub Pack 355, sponsored by Our Lady of Mount Carmel, Essex, Knights of Columbus Council 2452; Cub Pack 665, from St. Bartholomew, Manchester; Troop 216, Severna Park Knights of Columbus Holy Trinity Council 3413; Troop 450, St. John the Evangelist, Severna Park; and Troop 1274, St. John the Evangelist, Frederick.
In addition to performing service, the 230-plus recipients of the five National Catholic Committee for Scouting religious emblems and 120-plus recipients of the National Catholic Committee for Girl Scouts and Camp Fire religious emblems were required to deepen their knowledge of the faith and their relationship with God.
Also see:
Pope asks prayers for Ukraine
Rape awareness should grow, Anne Arundel exec tells Archbishop Spalding women
PrevNext