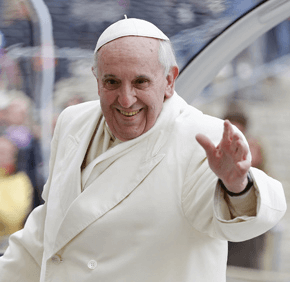 By Catholic Review Staff
Questions and tweets about the pope streamed across the main screens along with the hashtag #FrancisFactor.
Audience members laughed and clapped as Father Thomas Rosica, with a few added one-liners, directed questions to the panelists.
On Tuesday, March 18 the Archdiocese of Baltimore hosted “The Francis Factor,” an event held to mark the one-year anniversary of the election of the pope. Cardinal Seán O’Malley, archbishop of Boston, and four panelists first shared their thoughts on “The Francis Factor” and then engaged in a dynamic forum with questions from the live audience and via social media.
Cardinal O’Malley, a member of Pope Francis’ advisory Council of Cardinals, gave the keynote address and was among the panelists on stage, which also included Basilian Father Rosica, CEO of Salt & Light Television; Helen Alvaré, professor of law at George Mason School of Law and Catholic author; Jesuit Father Matt Malone, editor-in-chief of America magazine; and Kerry Robinson, executive director of the National Leadership Roundtable on Church Management.
Below are tweets and pictures from participants:
See also:
‘Francis factor’ has power to evangelize