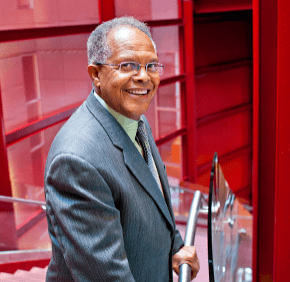 Paul McMullen
pmcmullen@CatholicReview.org
The priesthood’s loss was education’s gain.
Dr. A “Skipp” Sanders enjoyed a groundbreaking career serving Maryland’s public schools before helping lead the Archdiocese of Baltimore’s Division of Catholic Schools.
Sanders is now executive director of the Reginald F. Lewis Museum of Maryland African American History and Culture in Baltimore. It is currently showcasing the Kinsey Collection (see below), but Sanders has a background that merits its own exhibit at the corner of President and Pratt streets this Black Catholic History Month.
In a state that produced Supreme Court justices as varied as Roger B. Taney and Thurgood Marshall, Sanders’ background includes a father who was a foot patrolman in Baltimore in an era when the city police department barred blacks from driving squad cars.
In 1959, while still only 16, Sanders was in the third graduating class to include blacks at Baltimore City College, then a highly-selective all-boys school. He then entered St. Charles, the former minor seminary in Catonsville.
“I was the first, and only, black there,” Sanders said.
The archdiocese was still several years from its first ordination of a black man. Sanders made his way through St. Mary’s Seminary and was a transitional deacon, preparing to be ordained in 1968, he said, when “confusion” entered the discernment process and he felt God calling him elsewhere.
Nonetheless, Sanders says, “The church gave me everything I am.”
That harvest of plenty includes a doctorate in education from the University of Pennsylvania and three decades with the Maryland State Department of Education, the last 17 years as deputy to then-superintendent Nancy Grasmick.
Sanders previously headed the Maryland Principals Academy, oversaw instruction on Maryland Public Television and teacher certification – and it all began with his faith.
In 1971, Sanders weighed a job offer from Social Security while waiting to see how his application to teach in Baltimore City was received.
“Carroll Rankin, the principal of Edmondson High, had heard me talk in his parish during my seminary days,” Sanders said. “It turned out his faculty was 90 percent Catholic. He hired me to teach English and drama.”
Sanders had converted to Catholicism in 1956. He had worshiped with his family at Baptist and Presbyterian churches in Baltimore, until an aunt, visiting from New York, took him to Mass at St. Edward, which would become his home parish.
“It was different and exotic,” Sanders said of the liturgy.
He is a parishioner of St. Vincent de Paul in Baltimore, where its pastor is a seminary classmate, Father Richard T. Lawrence.
Sanders himself finally went to work for the archdiocese in 2008, when he became associate superintendent of the Division of Catholic Schools.
Among its principals at the time was his wife of 34 years, Pam, then the leader of St. Ambrose Catholic School, who sat on the Blue Ribbon Committee on Catholic Schools that recommended a reorganization of the system in 2010.
“We kept our careers separate,” she said, “but Skipp was always a good sounding board.”
Sanders, 70 but with the appearance of a man 20 years younger, leaves his Randallstown home every morning at 5:30 a.m. and hits a gym on Security Boulevard before work. Lifelong learners, he and his wife recently completed their second visit to Italy, which of course, she said, included another stop at the Vatican.
Kinsey Collection
What: “The Kinsey Collection: Shared Treasures of Bernard and Shirley Kinsey – Where Art and History Intersect” includes art and artifacts pertinent to the black experience in the United States. The collection, which began 35 years ago when Bernard Kinsey, then a Xerox executive, viewed the 1832 bill of sale of a slave, includes slave shackles and original copies of the Dred Scott ruling and the Emancipation Proclamation.
Where: Reginald F. Lewis Museum of Maryland African American History and Culture, 830 E. Pratt St., Baltimore
When: Through March 2
For more information, visit RFLewisMuseum.org or call 443-263-1800
Also see:
Inside Sports: NDP volleyball proves its A Conference caliber
Josephites still reaping the harvest
PrevNext