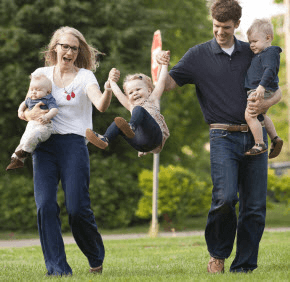 By Paul McMullen
pmcmullen@CatholicReview.org
More than 900 miles separate the Tuohy residence in Memphis from Baltimore, where both of its sons can be found.
“What mother could complain, having both of her boys in the same city?” Leigh Anne Tuohy said. “That was God-driven, as is everything in our lives.”
That narrative inspired “The Blind Side,” which earned Sandra Bullock a Best Actress Oscar in 2010 for her portrayal of Tuohy, the matriarch of an affluent white family that took in and eventually adopted Michael Oher, a homeless black youth.
Oher, now 6-foot-4 and 315 pounds, is a fifth-year offensive lineman for the Baltimore Ravens. The Loyola University Maryland basketball roster includes his 6-foot brother, Sean Tuohy Jr., a redshirt freshman who answers to S.J. – same as the suffix that denotes a Jesuit priest.
The Greyhounds, 2-0 through Nov. 15, do not play Thanksgiving Day, which is a good thing, because the Ravens have a prime-time game at M&T Bank Stadium against the Pittsburgh Steelers.
Leigh Anne and her husband, Sean, their daughter, Collins, and S.J. will take their turkey in Baltimore, a football-driven family reunion similar to one they enjoyed in New Orleans last February at the Super Bowl, albeit this one timed for National Adoption Month.
Oher, who objects to the movie’s depiction of him as a football rube when he met the Tuohys, declined to be interviewed for this article. His brother, who is shown as a bold little kid in “The Blind Side,” notes its verisimilitude in other areas.
“I’m not 4-foot-4 anymore,” S.J. said, stating the obvious. “People ask, ‘Do I love the movie?’ I like the message it promotes, and what it stands for. People ask, ‘Is your Mom like that?’ She’s worse.”
As first related in a Michael Lewis book, “Blind Side: The Evolution of a Game,” Collins Tuohy and Oher were classmates at Briarcrest Christian School in Memphis when the family SUV passed him walking home from school one night.
“That scene in the movie is accurate,” Leigh Anne said. “I literally told my husband, ‘turn the car around.’
“We didn’t set out to do this. Honest to goodness, our two biological children gave us fits, and we weren’t looking to adopt. It was one random act of kindness, which gave us a platform.”
It didn’t hurt that Oher grew into an All-American at the University of Mississippi and a first-round selection in the 2009 NFL draft.
A generation earlier, his adoptive father played basketball for Ole Miss. A restaurateur and commentator for the NBA’s Memphis Grizzlies, Sean Tuohy still holds the Southeastern Conference record for career assists. He passed his love of basketball to S.J., who met the Loyola U. coaching staff at a Ravens’ game.
“Michael wasn’t the main reason I came here, but he made it even more comfortable,” S.J. said. “I always heard him talk about how much he loves Baltimore. When I was in high school, I’d get to 10 or 11 of his (NFL) games, whenever we didn’t have a game.”
The Tuohys worship at a non-denominational church in Memphis and at Grace Fellowship Church in Timonium while in Baltimore. Sean Sr., however, was raised Catholic in New Orleans. His father and a sister were educated at Loyola University New Orelans, and S.J. raves about being on a Jesuit campus.
“The campus has a homey feel, this is a good place to call home,” said S.J., whose senior year of high school coincided with Loyola’s run to the 2012 NCAA tournament. “I liked the direction of the team.”
S.J. practiced without a scholarship last season, when he did some radio commentary for the Greyhounds, but he can do more than talk about the game, as he set records for assists at Briarcrest Christian.
“We liked the way that S.J. played on his high school team, and we saw potential,” said G.G. Smith, Loyola’s first-year coach. “We told him that if he came to Loyola and worked hard as a freshman that he could earn a scholarship. That’s exactly what he did.”
S.J. is a backcourt reserve on a team that features veteran guards Dylon Cormier, who played at the Cardinal Gibbons School, and St. Frances Academy product R.J. Williams.
He has experience in a supporting role. Home on a sweltering Labor Day weekend, his mother recruited him to help deliver sport drinks to Memphis-area high school football practices.
“I let her (his mother) do the talking, always,” he said, of his family’s role promoting adoption. “When people care enough to listen, it’s easy to talk about.”
Leigh Anne spoke to the Catholic Review by phone, at the start of National Adoption Month, when her advocacy accelerates.
“We’re talking every chance we can,” she said, in between appearances on national talk shows. “It (adopting Oher) hasn’t been easy, but everything in life worthwhile takes work.”
Her cause gained a fresh talking point in the case of 15-year-old Davion Navar Henry Only, who last month in a Florida church pled for a family to adopt him.
“Just like Michael, he was never told he was loved,” Leigh Anne said. “There are approximately 400,000 children in foster care in this country, and we’ve got 460,000 faith-based institutions. If each one would find a home for a child … ”
To learn more about the Tuohys’ work, visit makingithappenfoundation.com
Also see:
Fire at St. Jerome, gunfire in Dallas
Pope Francis’ top ten reasons to go to confession
PrevNext