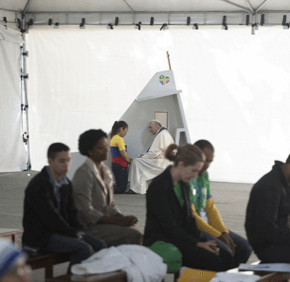 By Carol Glatz and Catholic Review Staff
There’s been lots of anecdotal evidence of a boom in people going to confession because of what Pope Francis has been saying about it.
Archbishop Rino Fisichella, president of the Pontifical Council for Promoting New Evangelization, said he repeatedly hears reports from priests that “a lot of people have been going to confession and many have said that while they hadn’t gone in a long time, they felt touched by the words of Pope Francis.”
“God is happy when he gives us his mercy,” and it’s that invitation to not be afraid to ask for God’s forgiveness that is fueling the boom, said the regent of the Apostolic Penitentiary, the Vatican court that deals with the sacrament of penance.
Msgr. Krzysztof Nykie told Vatican Radio Nov. 14 that the four papal basilicas and churches around the Vatican are “full of people who are asking for confession and for dedicating time for prayer,” particularly on a Wednesday general audience day and the day of the Sunday Angelus.
“They are coming to confession with greater confidence and a sincere spirit of repentance,” he said.
The pope has been emphasizing the importance of the sacrament of reconciliation because “God’s mercy is at the heart of the Gospel message,” the monsignor said.
“Jesus came to save those who are lost,” and the pope wants all men and women to know that conversion and salvation are always possible at any time in life.
The officials at the Apostolic Penitentiary have been sharing this message for a while.  Now it’s a message more people seem to be hearing.
Below are some of Pope Francis’ memorable quotes about why Catholics should go to confession:
1.     Confession helps people feel shame for the wrong they have done and embraces them with God’s love so that they know they are forgiven and can go out strengthened in the battle to avoid sin in the future.
2.     “But if a person, whether a layperson, priest or sister, goes to confession and converts, the Lord forgives. And when the Lord forgives, he forgets. This is important,” Pope Francis told reporters July 28.
3.   The confessional is not a dry cleaners, a business of sorts that’s just washes out the stain of sin, the pope said to members of the Vatican’s investment agency April 29.
4.     “…when the door starts closing a bit because of our weakness and sins, confession reopens it.”
5.     “I can’t be baptized two or three or four times, but I can go to confession, and when I go to confession, I renew that grace of baptism,” the pope said at his general audience Nov. 13.
6. It’s not a torture chamber where you’ll be raked over the coals.
7. Confession is an encounter with Jesus whose “mercy motivates us to do better.”
8. It’s not a psychiatric session that neglects the question of sin or a mental email to God that avoids the face-to-face encounter with the Lord through the priest.
9. The sincere and humble admission of one’s weaknesses, of having “a sliver of Satan in my flesh,” shows that the power of salvation comes from God, not oneself,” Pope Francis said in a morning homily June 14.
10. Confession “is going to praise God, because I — the sinner — have been saved by him,” who always waits and always forgives “with tenderness.”
Also, read Pope Francis’ story about one confession he says changed his life.
See also:
Confession renews grace of baptism, pope says at audience
PrevNext