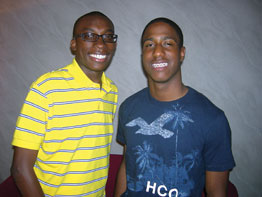 When we had alligator sausage for lunch, it was clear we were in a different part of the country. We are Blair Simms and Donald Singleton. As graduating seniors from Mount St. Joseph High School, we decided to “give back” as part of our senior project. We traveled to New Orleans with the goal of helping build houses for families still devastated by the damage Hurricane Katrina left two years ago. We really did not know that the two-week experience would be life-changing. Down in New Orleans we learned not to take anything for granted.

From May 5 through May 16, Donald and I did several different community service projects. We helped refurbish old wood to make new doors and windows for people in the Ninth Ward. It was part of a project for Hands ON New Orleans, a nonprofit organization. We tutored children at St. Joan of Arc Catholic School, and sold Mother’s Day baskets with members of the Corpus Christi youth group. It was upsetting to hear some of the people we worked with tell stories of how they survived the hurricane. Some of them lost everything. They were so open about their current struggles to rebuild their lives. Donald was really touched by this part of the trip. It was a humbling experience and we really felt blessed to be able to share with these people.

Blair’s favorite part of the trip was working with fifth-grade students at St. Joan of Arc Catholic School. Donald tutored the first grade, checked tests, helped the children with their math and served as their gym teacher. For both of us, it took patience and kindness to work with the kids. We grew closer to them, and they treated us like we were their big brothers. We could see the hurricane still had a deep effect on them.

The work was extremely hard at times. We had a job at the Society to Prevent Cruelty to Animals. The dogs and cats had been rescued after being abandoned by their owners during the storm. We had to walk several dogs and then clean out their cages. We also had to clean out cat litter. Donald almost got attacked by a dog down there. It was very sad to see dogs with missing body parts and breathing problems. After work, we apparently were pretty strong. One of our sponsors, Father Ray Bamberger would tell us that we needed to go straight home and take a shower.

We did have some fun. One of our duties was to go with students from P. Singleton Elementary School on field trips to the zoos in New Orleans and Baton Rouge, La.

Another sponsor, Father Anthony Bozeman, S.S.J., was able to set us up with Ansel Augustine, a youth minister at St. Peter Claver in New Orleans. Mr. Augustine took us on a tour around the Ninth Ward and part of St. Bernard Parish. He showed us a lot of work still needs to be done. He showed us his grandmother’s house that is going to be rebuilt. He told us how his fiancé died in the hurricane. He is living proof that you can overcome anything if you have faith in God. He delivered a powerful message of how life can change overnight.

Overall, the trip will always be in our hearts. We will never forget the experience that we had together. New Orleans is our second home, and we hope that we can go back next year – just to help out and see the difference from year to year. We are praying for the people of New Orleans.