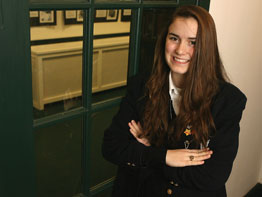 When you drink a cup of coffee, you can make a difference.

That’s the message that Maria Louzon, a 16-year-old parishioner at Church of the Resurrection, Ellicott City, is trying to impart, even though she’s not a coffee drinker.

Maria is organizing the parish’s fourth sale of Fair Trade coffee and chocolates, a concept she learned about at a weekend youth retreat focusing on social justice.

“You can do something locally to affect people globally – I’d never heard of anything like that,” she said.

At the Justice Action Weekend in July 2006, she listened to a presentation by Catholic Relief Services (CRS) about Fair Trade products, produced with business practices that mirror Catholic social teaching.

Jacqueline DeCarlo, senior program advisor for the Baltimore-based CRS, said products from a variety of companies are certified by an independent agency, which ensures the workers are paid a living wage, working conditions are safe and healthy, and children aren’t exploited. Fair Trade products also are produced in ways that promote environmental sustainability.

“Fair Trade just makes simple sense – (young people) know people should be treated fairly, the environment should be protected,” she said. “They get it and it really energizes them to take action.”

But taking action, as Maria learned, is a bit more complicated.

She sat down with the adults at her parish, including Coordinator of Youth Ministry Albert Boren, and shared her commitment to sell Fair Trade coffee to parishioners after Mass.

“Basically, the whole project was put on me because it was my idea,” she said.

“It was sort of her project; she just kind of took it under her wing,” Mr. Boren said. “She’s running the whole thing, everything from making the fliers to put in the bulletin to ordering the coffee.”

Parishioners weren’t familiar with the concept, “but then they pulled through to help,” she said.

In fact, at her first sale in November 2006, she sold out of coffee and didn’t have enough for the noon Mass.

“We didn’t do preorders because we had no idea how the parish would respond,” she said.

In February 2007, she organized another sale, adding hot chocolate and chocolate candy and accepting orders before the sale.

At her third sale, this past November, dark chocolate was the hot item.

She’s organizing another sale for March 8 and 9.

“At my church, I know a lot of people are really excited about it,” she said, “They’re really amazed we can help people around the world.”

Her concern spreads to other products, too.

“Now when I shop I don’t shop at some stores,” Maria said. “I’ve been trying to find some places that sell Fair Trade products.”

“She’s very social-justice oriented,” said Mr. Boren, “all she cares about is helping others.”

The sales each have raised about $1,200, and the money goes to the Archdiocese of Baltimore to help send youth to social-justice activities such as Justice Action Weekend and High Li, the high school leadership institute.

“We’re a hyper-consumer culture,” said Ms. DeCarlo. “Fair Trade is a great way to stop and say ‘How am I using my dollar?’ and from there you can say, ‘Do I really need all the products I have?’ It’s a really good entry point.”