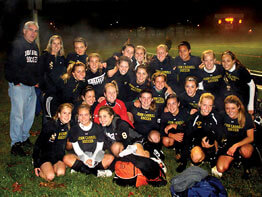 As Thanksgiving approached, the boys and girls soccer programs from The John Carroll School, Bel Air, put words into action on Nov. 20 in a benefit all-star soccer game at Harford Community College. The teams and a core group of volunteers arranged this fundraiser, named “Independently We Compete, United We Stand,” to benefit two special young ladies in John Carroll’s soccer community who are currently battling cancer and looking toward recovery.

As the John Carroll soccer players suited up, their competition was an all-star selection from public schools in Harford and Cecil counties.

“It was a moving event for everyone involved,” said Gary Lynch, John Carroll’s girls head coach and event planner. “As the color guard marched onto the field with our players’ right behind them and as the national anthem played, the feeling in the air was just very special.”

The Patriot boys tied 1-1 with the Harford and Cecil county players, while the Lady Pats came away with a 3-0 blitz of their competition. John Carroll’s Garth Stephan scored in the early game, and Grace Gaeng and Paige Hollenback scored in the game following.

More than the goals scored, however, was the sense of hope and thanksgiving for those two young ladies, Seton Keough freshman Keeley Imel and The Catholic High School freshman Brandy Foehrkolb.

Imel was diagnosed this summer with Medulla Blastoma, a cancer of the brain. Since her diagnosis, Imel has undergone surgery at The Johns Hopkins Hospital and is currently at St. Jude’s Cancer Center for Children in Memphis, Tenn., where she is receiving treatment.

In late September, Foehrkolb was diagnosed with Hodgkins Lymphoma. With two surgeries and a multitude of tests behind her, Foehrkolb is currently receiving chemotherapy at The Johns Hopkins Hospital.

Both girls love soccer; Imel has been involved in club soccer, including the Baltimore Bays, club basketball and club lacrosse, and Foehrkolb played soccer for the Cubs’ varsity team as well as for the Baltimore Bays. Her nickname on the soccer field is “Money” because of her consistent play and goal-scoring ability.

Gary Lynch added that, “The biggest thing is that these women just know that people are supporting them.”

Approaching the event, Kari McBride, Catholic High’s athletic director, said, “I am truly grateful to Gary Lynch, The John Carroll School and everyone involved in arranging the event. The Foehrkolb family had been very strong and optimistic throughout this entire ordeal.”

McBride went on to say, “Brandy has shown great courage and strength and could not be happier that an event, especially a soccer game, is being held to help support her family. Mrs. Foehrkolb literally had chills and was speechless when I told her about the event. They are truly grateful and appreciate all the support.”

A special gift will be given to both Imel and Foehrkolb, as each will receive a World Cup uniform jersey from soccer great Abby Wambach.