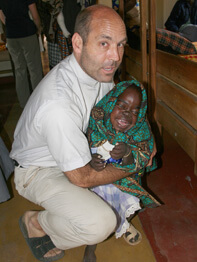 When Pamela Protani spent part of her day feeding and playing with children with mental and physical disabilities at a South African orphanage last month, she was stunned by the reception she received on the streets of Pretoria.
“It was indescribable,” said Ms. Protani, a parishioner of St. Joseph in Fullerton who was one of 16 Catholics from the Archdiocese of Baltimore to participate in a two-week mission to Africa in mid-August.
“Children from all over the neighborhood came up and took us by the hand,” she remembered. “Even on the main street, people were blowing horns, waving and taking photos. It was very humbling.”
Representing seven parishes, the Baltimore pilgrims ministered in South African and Tanzanian orphanages, AIDS clinics and schools run by the Missionaries of Charity, the religious order founded by Blessed Teresa of Calcutta. They donated more than 150 pounds of clothing, toys, candy, rosaries, holy cards and other items.
Dr. Michael Hargadon, a parishioner of the Patronage of the Mother of God in Arbutus and a dentist, treated some dental patients free of charge. The pilgrims also toured the Serengeti plains, catching first-hand glimpses of rhinos, gazelle, giraffes, hippopotami and other wild animals.
Father John Lombardi, chaplain of the National Shrine Grotto of Lourdes in Emmitsburg, helped coordinate the mission trip and was joined by Father J. Collin Poston, associate pastor of the Church of the Resurrection in Ellicott City.
The pilgrimage focused on what Father Lombardi called the “three S’s” – service, spirituality and safari.
“Every day, we celebrated Mass, had holy hours, prayed the rosary and the Liturgy of the Hours no matter where we were – airports, chapels and even on the Serengeti,” he said. “We were there for the Lord Jesus.”
After discovering that a hospital in Arusha, Tanzania, did not have an ambulance, the pilgrims decided they would purchase one and donate it to the hospital, Ms. Protani said. A committee has been formed to raise money to make it happen, she said.
“To see the devotion and reverence of the people, as well as the jubilation and worship through singing and joy was very inspiring and moving,” said Father Poston. “It really spoke beautifully of the universal church and I will certainly remember them as a priest in my prayers.”
Other parishes represented on the trip were Holy Family in Randallstown, St. Peter the Apostle in Libertytown, Shrine of St. Anthony in Emmitsburg and St. Joseph in Taneytown.