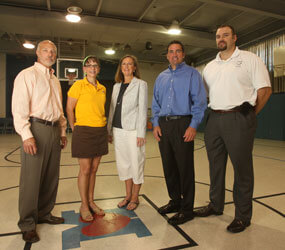 Immaculate Heart of Mary School is rolling out a new program. The Center for Leadership in Communication Arts will combine modern digital techniques with old school skills such as writing and public speaking.

“We want to equip our children to communicate effectively,” principal Amy Belz said. “We want them to be able to think on their feet.”

Belz, her staff and their Baynesville parish see to it that IHM students are also able to move those feet.

In the spring, in a program coordinated by Steve Crum, another volunteer, 40 IHM middle-schoolers spent time at Pine Ridge Golf Course, learning about the fundamentals of the game and its etiquette from the professional staff there.

Those ventures are buttressed by more traditional team pursuits offered by the parish athletic association, which keeps active hundreds of children and their parents, making the IHM gymnasium a hot spot regardless of the weather.

“From little kids to adult leagues for men and women, there is a tremendous basketball program,” Belz said. “The gym is in use seven days a week. I had to hand the (scheduling) calendar off to Debbie Speratio. I was trying to be nice, ‘sure you can have the gym,’ but I got into trouble doing that.”

One of the basketball hoops lowers in front of the stage, as the gym doubles as an auditorium. Even there, IHM students keep moving, as approximately 85 in the sixth through eighth grades comprised the cast and crew for the 2010 spring musical, “Willie Wonka and the Chocolate Factory.”

Whether by design or happenstance, all of those extracurricular activities mean that Immaculate Heart of Mary School embraces the concept of a sound mind in a sound body. It has always had its proponents, whether it was espoused by the ancient Greeks, enlightenment philosophers or First Lady Michelle Obama.

She brought her cause of childhood obesity to Baltimore July 20. The next morning, Belz and Libbie Kendall, a music and drama teacher, outlined the new Communication Arts program.

“If creative writing is not your most outstanding attribute, you have other vehicles to use,” said Kendall, who is entering her 14th year on the IHM faculty. “We have the technical ability to record and edit. We were already doing this piecemeal, but we don’t want to run it as separate entities. Let the visions meld together.”

The program will start with sixth-graders. Its mission statement references the “spirit of the principles of Catholic Social Teaching.”

“Dignity, community, I believe that is the spirit of the program,” Belz said. “We’re very excited about launching this. They students have so much talent, all we’re doing is reining it in.”