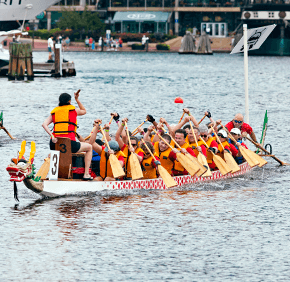 Competing against 35 other teams, T. Rowe achieved the day’s fastest race time – 1 minute, 34.7 seconds – in its final race against M&T Bank and Brown Advisory for the A Division title.

“What a great event this is,” he said. “It brings the community together. It’s for a great cause.”

Watch this video of the Wells Fargo team performing their chant.

Catholic Charities’ Dragon Boat Races raise money, awareness and support for the organization’s charitable programs. Each team partners with a program and are encouraged to build relationships with the people whom it serves. The teams also raise additional funds for their programs through a Paddler’s Challenge.

This video shows the scene at Baltimore’s Inner Harbor.

Total funds raised through the 2012 races are still being collected, but Catholic Charities expects to raise more than $700,000 from the 2012 races.

Race chairman Tom Capps, vice president of construction at Harkins Builders in Marriottsville who won in 2000 and 2002, said that this year’s race met all of its organizer’s goals. It attracted the largest number of teams in the race’s history, increased sponsorship levels and inspired intense competition.

Racing began with preliminary heats at 8 a.m. with a opening ceremonies at 9:30 a.m. Archbishop William E. Lori of Baltimore gave a benediction before joining Catholic Charities CEO William McCarthy Jr. in painting a dragon figurehead’s eyes red, a Chinese custom symbolizing the “awakening” of the dragon and the official start of the races.

Teams raced along a 1,290-foot course from the World Trade Center to the Maryland Science Center, where most of the spectators gathered. Each 45-foot-long boat carried 20 paddlers, eight of whom were women; one steerer, who stood with a long paddle in the boat’s rear; and one drummer, who sat on the boat’s bow and set the pace with a drum.

Each team raced three or four times throughout the day. Team members and their supporters rested in “Tent City” in nearby Rash Field. Teams showed their spirit for the races and their partner programs through tent decorations and a drummer’s hat competition, resulting in headwear so large and whimsical that drummers do not wear the hat while racing.

Teams also performed team “chants” which ranged in style from a modified Air Force Jodie to re-lyricized pop songs, all expressing enthusiasm for the races and the importance of Catholic Charities’ work.

The sky darkened in the afternoon, and teams began to race against time as much as each other. The final race finished minutes before a heavy downpour soaked South Baltimore.

Despite threat of a storm, McCarthy said the day was “an outstanding success.”

To navigate a photo slideshow, click the arrows below.