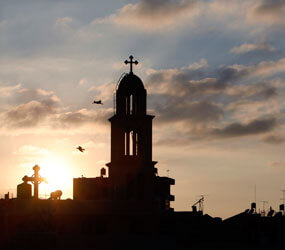 VATICAN CITY – The survival of the Christian communities of the Middle East is threatened not only by violence and political repression, but also by the churches’ weakened sense of mission, failure to work ecumenically and loss of their traditional liturgical heritage, bishops told the special synod for the Middle East.

“The Palestinian events, the civil war in Lebanon, the Islamic Revolution in Iran, the invasion of Iraq … Christians of all churches without distinction are martyred, forced to emigrate, forced to leave,” Armenian Archbishop Boutros Marayati of Aleppo, Syria, told the synod Oct. 11.

“This is a real ecumenical concern,” the archbishop said. He urged synod members to find ways to strengthen the bonds among all Christians in the Middle East, “encouraging a spirit of fraternity, dialogue and communion among the churches.”

After a morning of listening to formal presentations Oct. 11, the 185 synod members began making their own speeches to the synod during the afternoon session.

Archbishop Marayati said that while Christians throughout the region share many similar challenges, the situation of the communities varies from country to country; he suggested the synod be followed by ecumenical conferences in each country to offer specific, united responses to local needs.

Melkite Archbishop Elias Chacour of Haifa, Israel, told the synod that 2,000 years ago “my ancestors started spreading around everywhere the exciting news revolving around an empty tomb and a risen man.”

Despite oppression and persecution throughout the centuries, the Christians of the Holy Land continue to proclaim to the world the good news that Jesus rose from the dead, he said.

“He is risen, but his cross is still high in our sky. Our Christianity is hanging on that terrible cross,” the archbishop said. Christians in the Holy Land “still live under daily threats” from governments who want to transfer Arabs from their ancestral lands, he said.

Archbishop Chacour called the small Arab Christian communities in Israel and the Palestinian territories “the remnant of the family of Christ” and asked the universal church to be more supportive of the land’s native Christians.

“We need your friendship more than your money,” he told the bishops.

Coptic Bishop Youhannes Zakaria of Luxor, Egypt, said national conflicts, doctrinal differences among Christians and the rise of Islam have combined to weaken the missionary enthusiasm of the region’s Christians, an enthusiasm that was responsible in the first place for the spread of Christianity around the world.

“The church in the Middle East today is a minority living in the midst of a non-Christian majority, and is fighting against the danger of its own decline, and is struggling to maintain Christian faith in the hearts of its faithful,” he said.

Nevertheless, the church “must not be afraid or be ashamed and must not hesitate in obeying the mandate of the Lord, which asks it to continue teaching the Gospel,” he said.

Another Coptic bishop from Egypt, Bishop Kyrillos William of Assiut, told the synod that the liturgies of the Coptic and other Eastern Catholic churches always have been the primary means of drawing the faithful together, educating them and inspiring them to go out to evangelize.

From early in the 10th century, he said, the Copts translated their liturgy into Arabic and into the dialects spoken by the people.

The fact that the liturgy was in the vernacular, he said, “helped to preserve the faith; and if we compare our situation with that in neighboring countries of North Africa, we observe that several centuries later, Christianity, which flourished at the outset, has vanished because a foreign liturgy in a little-known language had been imposed on them.”

The problem today, Bishop William said, is that Latin-rite missionaries have come into Egypt and have started celebrating the Mass in Arabic just like the Copts do; “they celebrate Mass for our Eastern faithful, helping them separate from their churches and weakening their belonging to them.”

In a country where almost all the Christians are Copts – Catholic or Orthodox – it makes no sense to offer the Latin Mass in Arabic, he said.

The question of Latin-rite Catholic communities expanding at the expense of the Eastern churches also was addressed by Cardinal Roger M. Mahony of Los Angeles, who represented the U.S. bishops at the synod.

The cardinal acknowledged that in the countries where Middle Eastern Christians have immigrated, the dominant Latin church often unwittingly encourages the newcomers to switch rites.

For example, he said, while the Archdiocese of Los Angeles has supported and even offered financial assistance to the Chaldean, Coptic, Melkite, Maronite and Syrian Catholic communities in Southern California, most of the Catholic schools are operated by Latin-rite parishes that give a significant tuition break to families who are active members of the parish.

Catholic colleges and universities, he said, “are keen to offer courses and seminars on other religions – be it Judaism, Islam, Buddhism or Hinduism – but little if any attention is given to the theology, liturgy or spirituality of the Eastern churches.”

The cardinal also called for greater efforts to help Middle Eastern Christian immigrants reconcile with their past and become models of forgiveness and dialogue.

“Often Middle Eastern Christians come to North America with attitudes and opinions toward both Muslims and Jews that are not in keeping with the Gospel or with the strides we have made in the church’s relations with other religions,” he said.

Like with any immigrant who fled oppression or persecution, “the biggest challenge is helping them respond to the grace of giving witness to the Gospel by forgiving those enemies who quite often are the principal reason for their leaving their homeland to find peace and justice on our shores,” Cardinal Mahony said.